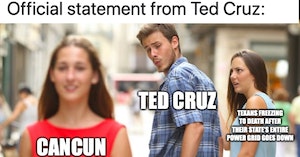 Ted Cruz Flew To Cancun While Texans Went Without Power, And Now There Are Memes

It’s hard to imagine something more blatantly irresponsible than a politician going off on vacation when their constituents are facing death and disaster due to infrastructure failures, which is why it makes sense that Ted Cruz did exactly that.

The Texas Senator jaunted off to Cancun, Mexico, with his family on Wednesday afternoon, even going so far as to request that Houston police officers help him out at the airport rather than see to the massive emergencies happening across the city and state.

And while the Cruz family enjoys the sun in a country he previously slammed in defense of disgraced president Donald Trump, millions of Texans are without power and water, suffering through an unusual winter storm with the threat of the power grid going out entirely looming over them.

After Cruz was spotted at the airport, outrage exploded online until his camp finally verified the following day that he was, in fact, on vacation.

Of course, they also immediately began to do damage control, with Cruz absurdly claiming he was merely escorting his family on Wednesday and insinuating he had always planned to return Thursday—something that is reportedly completely false, according to folks at United Airlines.

The same people who gleefully turned a blind eye at Cruz’s contributions to the January attempt at insurrection will undoubtedly do the same as he abandons his people during a crisis, but the rest of the country is watching.

And they’re also mocking, because the whole situation is such a clear cut villain move, it shows just how brazen Cruz and his ilk have become in neglecting their duties.

So let’s take a look through some of the best memes and jokes about Cruz’s mid-pandemic, mid-snowstorm flight out to Cancun, because really, what else do you even do when a politician makes choices this bad?