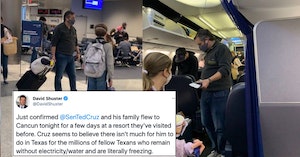 Sen. Ted Cruz came home from Cancun this week after photos of him on board a plane started circulating. Cruz recently traveled in a pandemic for a vacation with his family as his state was hit with snow and freezing temperatures. Power is out for millions of citizens, and at least 30 people have died across the south, according to the New York Post.

Flight records confirming his flight back were dug up by Punchbowl News’s Jake Sherman:

And a Republican source told The Post “the photos speak for themselves,” seemingly confirming that Cruz indeed boarded a flight to Mexico.

The pictures of the Texas senator on a plane and in the airport certainly do:

On top of everything else, ABC News reporter Ben Siegel tweeted that Cruz reportedly requested help from Houston police upon his arrival:

He’ll probably need protection because Texans are enraged. Cruz has not yet commented on the photos, though he did address the controversy around his tweets about California’s power outages last summer:

Telling his constituents to “stay safe” is about all the help Cruz is willing to provide.