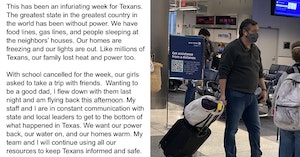 Breaking news, Senator Ted Cruz has found someone to throw under the bus for his Cancun trip PR nightmare, and it’s his own daughters. In a statement released by the senator, he claimed that his girls “asked to take a trip with friends” to Cancun and was just escorting his kids there overnight.

“Wanting to be a good dad, I flew down with them last night and am flying back this afternoon.”

By this statement alone, you would likely assume that Cruz intended to fly back to Texas to deal with all the problems he spends the rest of the statement talking about the next day all along.

However, it has been easy for people to confirm that Cruz originally planned to stay in Cancun until Saturday and only booked his return flight for Thursday after getting hit with a storm of criticism he clearly wasn’t prepared for.

People have also pointed to the rather large suitcase Cruz was spotted with as evidence that this was never intended to be an overnight trip. At the same time, there are surely plenty of other people who could have escorted his daughters to Cancun who are not currently U.S. senators representing the state of Texas during this crisis. Also, who is now looking after the girls in Cancun?

It also doesn’t help that the state of Texas is also full of children right now who can’t escape to Cancun while the power is out because they don’t have rich daddies. Cruz seems to be missing the point that people are angry about the glaring wealth inequality crisis that allows some to fly off to wherever they want like it’s nothing while not-rich families are desperately trying to stay warm with what little they have.

On Tuesday, for example, a Houston woman and her child died of carbon monoxide poisoning after she left her car running in the garage in order to try and use it as a source of heat. The woman and her eight-year-old daughter did not survive while an adult man and a seven-year-old boy were rushed to the hospital for treatment.

That family is shattered, but Ted Cruz gets to use his daughters, who are 10 and 12, as an excuse for sneaking off to lie on the beach in Cancun. People are not pleased.