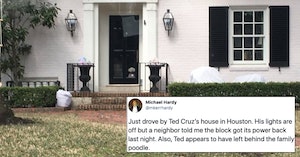 This week, Ted Cruz got busted flying to Cancun to escape the freezing weather in Texas.

There are so many things wrong with this decision it’s hard to list them all, but let’s try: We’re in a pandemic. Power is out in his state all over, leaving millions without heat, clean water, or electricity. Roads are blocked and communication is down. He’s a Texas senator.

After pictures of him in the airport and on a plane started circulating, Cruz flew on back and circulated a story claiming he was just dropping his kids off, not going on vacation himself.

He also claimed that the trip had been planned for a long time. But group texts were leaked allegedly containing messages from Heidi Cruz, his wife, saying their home was freezing and they were flying to Cancun to get away.

Could this story get worse? The answer is yes. The Cruz family abandoned their poodle, Snowflake:

Snowflake likely had a caretaker walking them and feeding them, but power has been in and out all week even in Ted Cruz’s neighborhood. So that little dog has got to be freezing its ass off.

It’s a very sad state of affairs for the dog, but people on Twitter are enjoying the strange irony of a dog named Snowflake: