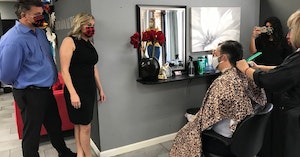 Texas Senator Ted Cruz was photographed getting his hair done at a salon owned by Shelley Luther, the woman who was arrested on Tuesday on charges of civil and criminal contempt of court for opening her business before Friday, when the state’s stay-at-home order ended. The haircut appears to be a blatant publicity stunt by Cruz, who tweeted about it and claimed that Luther was “falsely imprisoned.”

Hair salons & barbershops are open in TX today. Just got my hair cut for first time in 3 months at Salon ALa Mode to support Shelley Luther, who was wrongly imprisoned when she refused to apologize for trying to earn a living. Glad Shelley is out of jail & her business is open! pic.twitter.com/yJD8fWb84W

Luther was sentenced to seven days in jail and fined $500 for every day the salon was open when it should not have been, but was released early after the state Supreme Court intervened. All Luther had to do in order to avoid jail time was apologize in court, but she refused to do even that, claiming that she opened her business early for the sake of her employees.

“I have hairstylists that are going hungry because they’d rather feed their kids,” she said to the judge. “So sir, if you think the law is more important than kids being fed then please go ahead with your decision but I’m not going to shut the salon.”

Hopefully, none of those kids’ parents will die from COVID-19, or anyone else who could have been exposed thanks to Luther. Maybe if the kids were hungry, Luther could have fed them with her profits or at least advocated for better assistance for those who are out of work. But there’s no money for her to make from that.

Either way, everyone is making fun of Ted Cruz and his stupid hair right now.

Only the best mullets.

I would say “Shouldn’t elected officials set good examples?” But it is Ted, so we already know the answer.

She’s gonna need more than a pair of scissors to make that ghoul look presentable. #ZodiacKiller

Eddie Munster at the beauty parlor asking for a trim.

Whether it’s defying state shelter-in-place orders or lying to the FBI while working at NSA, you can always count on repubs to embody the “rule of law” …

This is good – keep us posted in 2 weeks

Don’t come crying to a doctor if you start coughing, Ted.