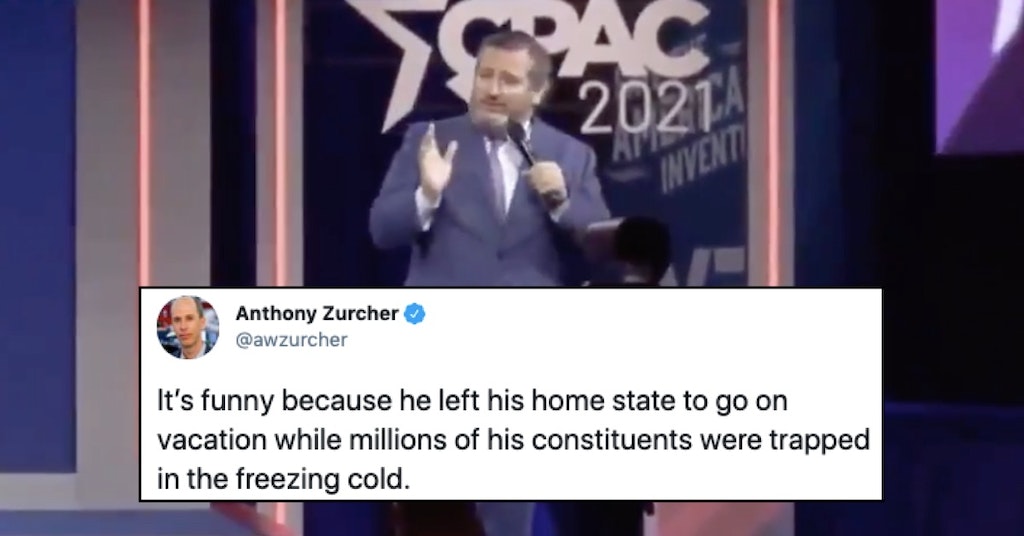 Texas Senator Ted Cruz is in Orlando, Florida, for the 2021 Conservative Political Action Conference just about a week after abandoning his state during a massive blackout and freezing temperatures.

Cruz was raked over the coals for traveling to Cancun with his family for a little vacay as his constituents literally died in the cold.

When he was busted, Cruz claimed all sorts of things about how he was “trying to be a good dad” for his daughters, how it was a long-planned trip, how he was just going to drop them off and come back, all of which were exposed as lies after neighbors leaked his wife Heidi’s group chat messages about the spur of the moment getaway in the cold.

Oh, also, he left behind his dog in his powerless home. Her name is Snowflake.

While he seems to be hated almost everywhere, Cruz has a sympathetic audience amongst the attendees of CPAC. That’s why the joke he made about his adventure seemed to hit:

“Orlando is awesome,” he opened, “It’s not as nice as Cancun, but it’s nice.”

And no, he made no other references to the crisis in Texas.

Cruz followed up this banger by trashing Bernie Sanders and Rep. Alexandria Ocasio-Cortez, two surefire ways to get the crowd down there riled up, the Independent reports.

“Bernie [Sanders] is wearing mittens,” he said, which is admittedly true, “and AOC is telling us, ‘She was murdered!'”

Here Cruz is mocking the very serious situation AOC was in on January 6th as Trump supporters invaded the Capitol building, which she opened up about on an Instagram Live in which she also said she was once a victim of sexual assault. Of course, Ted Cruz thinks this is stand-up material.

The Texas senator also took some time to criticize mask wearers, and the recommendation to layer masks as the far more contagious variants of COVID-19 become predominant in the U.S.

“And by the way, not just one but two, three, four–you can’t have too many masks,” he said. “This is just dumb.”

Here he is making some random noise:

Kind of sums up everything that comes out of his mouth.