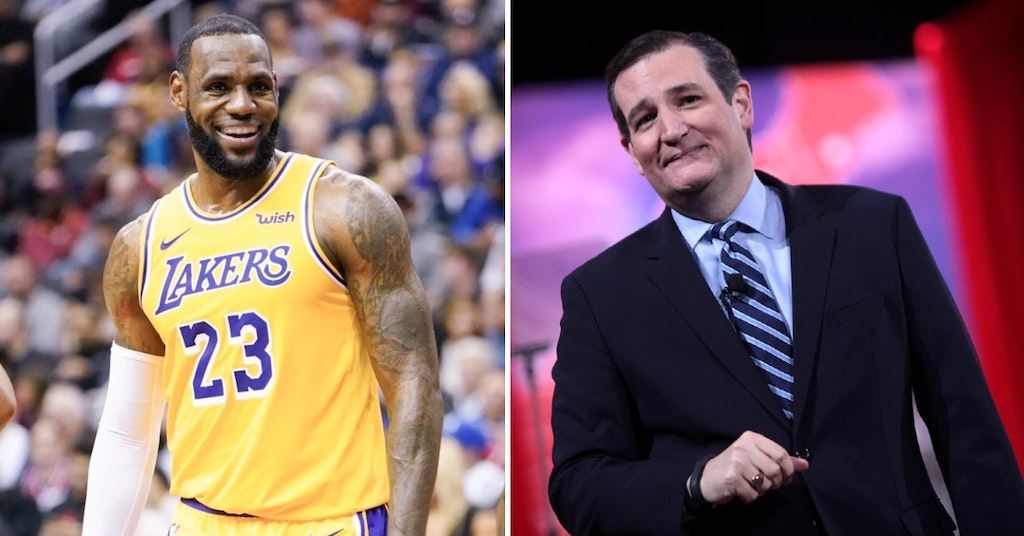 Following the murder conviction of Derek Chauvin on Tuesday, conservatives are predictably upset and also back on their “celebrities aren’t allowed to have political opinions” train after NBA star LeBron James demanded police accountability following the killing of Ma’Khia Bryant.

Distraught like the rest of us over the shooting of a 16-year-old girl, James tweeted a photo of the officer who shot her, Nicholas Reardon, with the message “YOU’RE NEXT #ACCOUNTABILITY.”

Considering the timing, most people immediately understood this to mean that James thinks Reardon should be the next killer cop to be convicted for murder and sent to prison. Many right-wing mouthpieces, however, took it to mean whatever they wanted it to mean.

James deleted the tweet after getting dogpiled by conservatives and replaced it with one that explained the meaning for them.

Regardless, right-wing figures continued to freak out, with Senator Ted Cruz going on Fox News to make the claim that somehow James’ call for accountability could be violent.

“And in this instance, ‘you’re next’ could certainly be interpreted by some, even, as a call for violence,” he said. “I think it was a grossly irresponsible message for LeBron James to send out.”

This was shortly after he called 16-year-old Ma’Khia Bryant a “woman” and defended the cop who killed her because she may have had a knife. Bryant reportedly called the police because the other girls in her foster home were attacking her. Officer Reardon arrived while a fight was in progress between a group of girls and decided four bullet wounds were an appropriate response to a possible knife sighting.

Cruz could just not understand why anybody would find a problem with this or any of the other high-profile police shootings recently captured on camera.

“The left consistently goes after, attacks and demonizes police officers,” he said. “Their immediate reaction, whenever there is an incident, is that police officers are in the wrong.”

Other conservatives, meanwhile, used to opportunity to attack China for some reason, with Rep. Lauren Boebert of irresponsible gun ownership fame trying to claim that the country is blackmailing him with something.

“Lebron James truly has a lot of nerve targeting a police officer for doing his job,” she tweeted. “I’m not sure what China has on him, but his constant push for division in this country is obscene.”

This sudden concern about division is brought to you by the political party responsible for the pro-Trump insurrection at the U.S. Capitol on January 6.

Another conservative and former ESPN host also attacked China and, bizarrely, W.E.B. Du Bois in his tweets about James.

For the record, Whitlock is also wrong about communism, which is explicitly against a class system and does not have “elites.”

In spite of a conservative attempt to ratio, James’ tweet on police accountability has reached 200,000 likes, far more than the number of comments. He hasn’t tweeted on the issue since then but hopefully will continue to do so in the future as every human has the right to do, regardless of celebrity status that may be inconvenient to a specific political party.