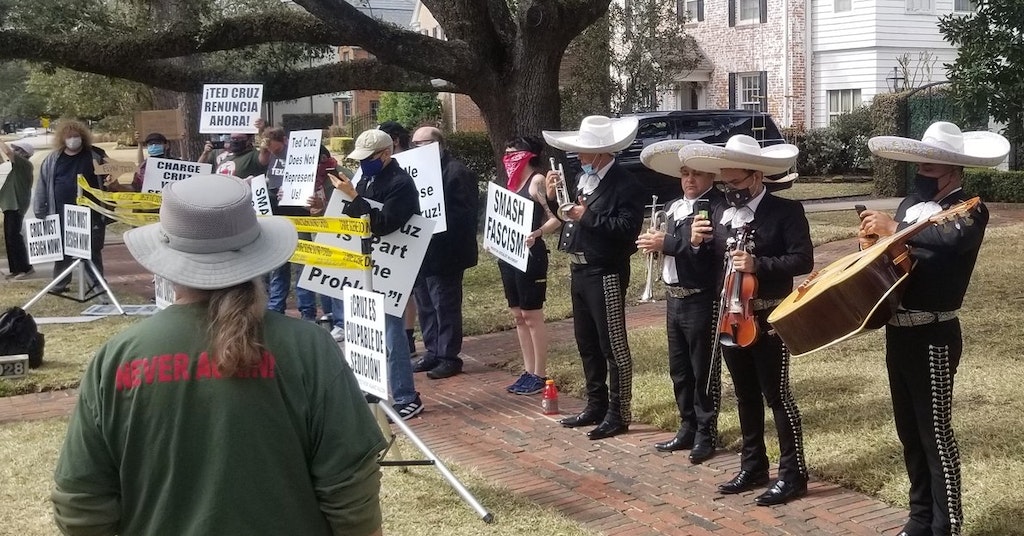 
If Ted Cruz thought frustrations with his trip to Mexico would simply blow over, he’s severely underestimated how angry his constituents are with him.

Residents of Houston, Texas, decided to go the extra mile to make sure the senator knew just how much he messed up by taking a sunny vacation while millions of Texans were suffering without power or water in the uncharacteristic winter storm.

So they sent him a mariachi band.

Bryan Hlavinka and Jenny Slater have claimed credit for the hilarious stunt that reportedly had Cruz’s neighbors coming out into their yards to listen to the tunes.

The Mariachi Mi Mexico band was led over to Cruz’s home by Hlavinka, where they serenaded the neighborhood while people held signs protesting fascism and Cruz’s general incompetence.

After word of the prank spread to the internet, folks online were quick to share their appreciation.

It also brought up the usual debate over whether protests should happen outside of politicians’ homes or if that should be off-limits.

Cruz’s family was likely still in Cancun when the band showed up, and based on his own desperate tweets, Cruz himself may have been out posing for photo ops at the time, but at least his neighbors got to enjoy a free concert. And everyone in Texas got yet another reminder of what a clown Cruz really is.