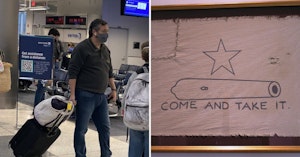 The story about Senator Ted Cruz flying off to take a vacation in Cancun just keeps getting better as people tear into him for abandoning his state to the freezing cold as stores run out of food.

One particularly fun detail is the fact that the mask he was spotted in at the airport is his “come and take it” mask with the little cannon, which is from a flag flown by Texans during their rebellion against Mexico.

Photos of Cruz in line at the airport and seated in his plane seat confirm that this was indeed the mask he wore. It seems to be one of his favorites, as he also wore it to Joe Biden’s inauguration in January.

The story behind the cannon-and-star image is that in 1831, a Texas colony asked for something they could use for self-defense from the Mexican government before the war, and they were given a single small bronze cannon. When the fighting started, Mexico sent soldiers to this colony to take the cannon back, but the colonists resisted.

In an act of defiance, they made the flag and flew it over their walls before successfully defending the cannon from the attacking soldiers. This became a point of pride in a state that really enjoys its hero stories from this period in history that otherwise gets very little attention from the rest of the country.

The point is that not only did Ted Cruz insult his state and all his constituents by flying off to a tropical beach while they suffer in the cold without power or running water, he also wore a mask with a symbol blatantly insulting the Mexicans who reside in Cancun. It’s like he’s trying to make people hate him.