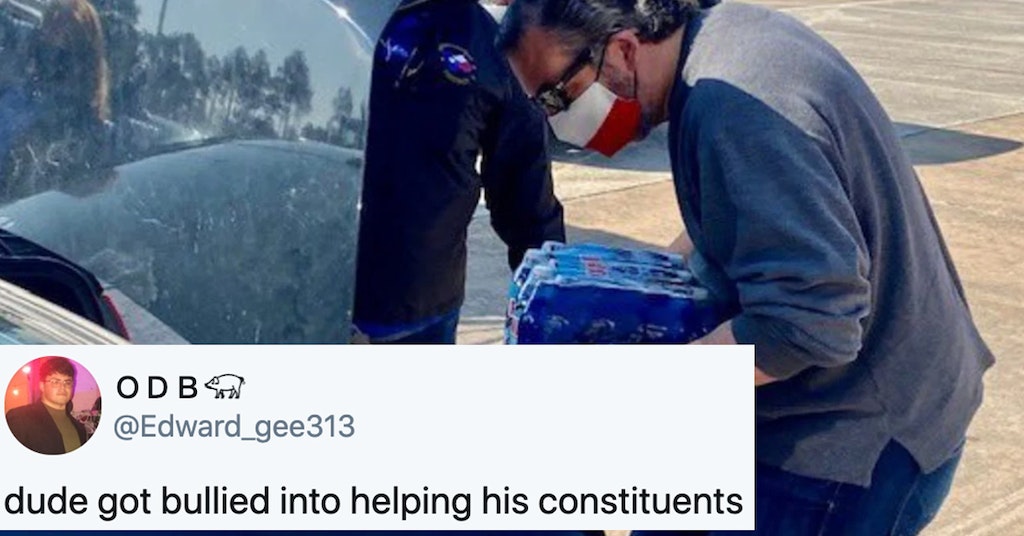 
Ted Cruz is doing major damage control after his ill-advised trip to Cancun in the middle of Texans struggling through a crisis, but it’s too little, too late.

Once the senator returned early from his jaunt down to Mexico, blaming his daughters and admitting the whole thing was a “mistake,” he finally did his job—at least long enough for a photo op.

Cruz shared pictures of him handing out food to firefighters and helping people carry water to their cars over the weekend, captioning one of his tweets “#TexasStrong.”

While it’s great that a politician is doing the bare minimum after being ganged up on by the entire internet, most people don’t seem willing to forget that if Cruz hadn’t been recognized at the airport, he’d have been lounging in the sun at a fancy Cancun resort over the weekend rather than doing anything to help Texans.

The pathetic attempt at covering for his egregious mistake is made more ridiculous by the fact that Beto O’Rourke, who previously lost his bid to take Cruz’s senate seat and is now a private citizen, and Alexandria Ocasio Cortez, the right’s favorite scapegoat, were actually doing things to help Texans while Cruz was trying to make his getaway.

And it didn’t go unnoticed that the senator was so desperate for a photo op to change the narrative that he failed to quarantine after returning from another country.

It’s only February and Cruz has made headlines for both failing in a statewide emergency AND his part in inciting an insurrection against the federal government. It’s nerve wracking to think what March might bring — and fascinating to wonder how many more incidents like this it will take for Texas to vote him out.