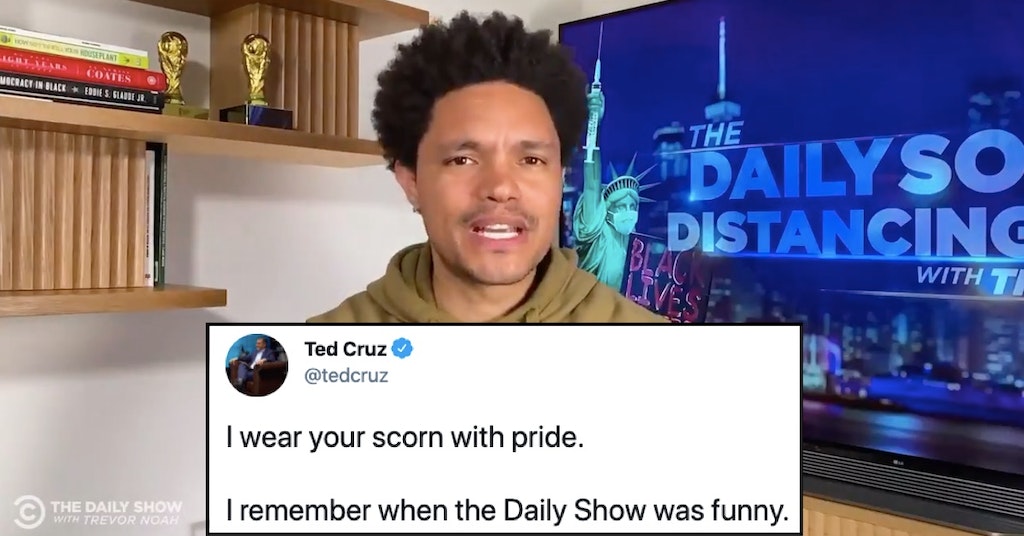 Ted Cruz Is Beefing With Trevor Noah, Who Is Expertly Dunking On Him

Senator Ted Cruz must run on being hated, because that’s the only thing that explains how he conducts himself on Twitter. And the Senate. And in his personal life. But today, he’s mainly embarrassing himself on Twitter after trying to start a fight with Trevor Noah, who mentioned Cruz in a throwaway joke on an episode of the Daily Show.

In the segment that set Cruz off, Trevor discussed the repercussions of the newly released U.S. Census report, which has shifted numbers so that New York loses a congressional seat and Texas gains two. This could have a lot of repercussions for the political future of the country.

“This is really unfortunate for New York state because it means that one of its congressional districts disappears,” Noah said. “Now, aside from New York getting screwed, the big news out of the census is that America’s population grew at the slowest rate since the 1930s. Basically, immigration is down and the birth rate is falling, primarily due to this photo,” he continued, showing a photo of Cruz.

“I don’t know exactly what that says, but I do know that the 1930s sucked for America,” Noah went on. “I mean there was the Great Depression, the Dust Bowl, everything was black and white, and if you wanted somewhere to sit, you needed to climb a half-built skyscraper. Yo, that was a sh-tty time to be alive.”

In his tweet about it, Cruz doesn’t mention the photo. Instead, he wrote, “Trevor Noah whines that people are fleeing high-tax blue states and moving in droves to low-tax states like Texas, where the jobs are.”

While it’s probably better to ignore Cruz, perhaps forever, Noah responded by bringing up how Cruz fled for Cancun, Mexico, while Texas had its power off and people were dying.

“Not sure I’d be using the words ‘fleeing’ and ‘Texas’ in the same sentence, Senator Cancun,” Noah responded.

To that, Cruz wrote, “I wear your scorn with pride. I remember when the Daily Show was funny.”

“And with that Ted Cruz has officially fought back harder against a tweet from a late night show than he ever did when Trump called his wife ugly,” Noah quote-tweeted.

Will this go on all day? Cruz loves the attention and Noah has an entire staff to writes jokes for him. So…maybe.