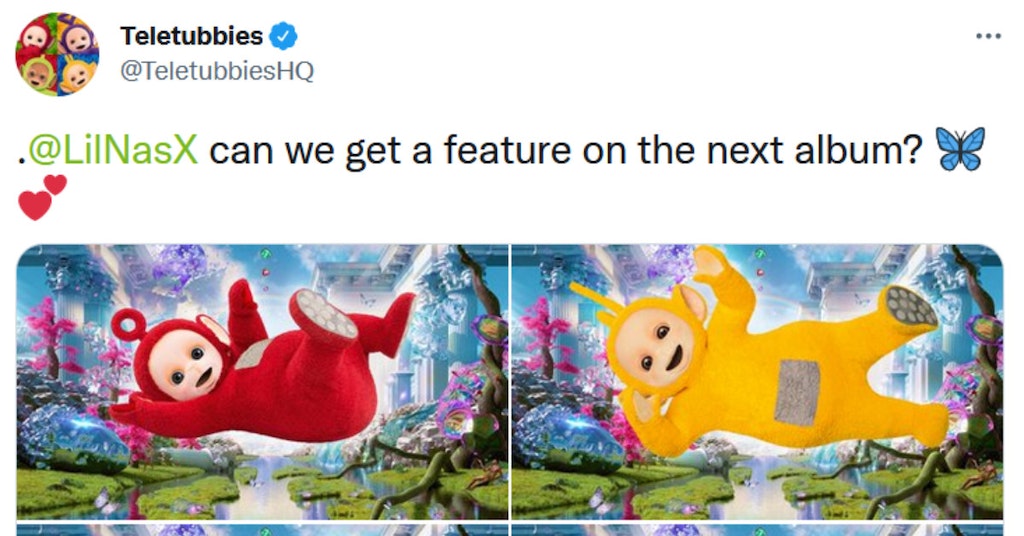 In the latest installment of conservatives getting super weird any time they’re exposed to anything even the slightest bit queer, right-wing pundit and failed Republican Senate candidate Lauren Witzke deemed the Teletubbies “Little Gay Demons” after they joked about collaborating with Lil Nas X on Twitter. The artist, whose recently released album Montero has quickly become a runaway hit, has gained a reputation for using colorful, fantastic, and psychedelic imagery in his music videos, not too unlike the brightly-colored TV program for very young children.

As any fan would have predicted, Lil Nas responded positively to the request from the Teletubbies for a feature on his next album.

Obviously this is a joke, as Lil Nas has also gained a reputation for his sense of humor and often jokes around with fans and other celebrities on social media. The artist’s massive popularity often upsets conservatives and other bigots due to the fact that he is an open and unabashed gay Black man and now has multiple hit songs on his attraction to men as well as the effects of growing up in a homophobic society.

This time, it’s Witzke, described as an “American Christian Nationalist” on Wikipedia, who is making the joke even funnier by whining about it.

Witzke herself is an unabashed homophobe, being open about her opposition to same-sex marriage and the inclusion of queer people in the Republican party. She once referred to trans people as “mentally ill” and “demonic” in a tweet from her now-suspended Twitter account. The pundit has also expressed support for QAnon and gave an interview with VDARE, a website promoting opposition to immigration to the U.S. that has been featured by hate watch groups like the Southern Poverty Law Center as a white nationalist publication.

Lil Nas X has not personally responded to the “little gay demons” comment, but his fans have flooded Witzke’s Instagram post to roast her for being super weird.

“I’m just so fucking grateful I don’t know anyone like you in real life Lauren,” said another commenter, “it must be utterly exhausting to be so hateful all the time.”