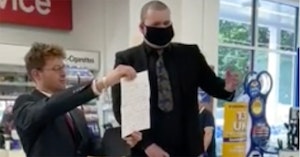 A grocery store worker at British chain Tesco was told that he had to submit a formal resignation letter, and took that to delightful extremes. He also had the foresight to film the spectacle of the letter being read, which is now entertaining Redditors.

The video, posted to the r/funny subreddit, shows the employee and a special designated letter-holder coming into the Tesco for the reading of the letter. They were, of course, dressed up and acting as proper as possible for what turned out to be a very stilted reading.

The letter started, “To whomever it may concern: I write this letter from a place of sorrow and regret,” which at least one commenter noted was totally relatable.

It went on to note, “These six long, arduous years have caused me to grow quite weary. Whilst I have reveled and labored with my subordinates, my knees have grown weak, and the grease on my elbows has depleted.”

Then, the reader delivered a line that audiences have found to be particularly hilarious: “This is not for every man to accept large packages into their backdoor. Nonetheless, it was my duty.”

While the employee read his letter, the attendant opted to stand on a footstool, making him taller than he already was, possibly in an effort to appear imperious. He stayed silent through most of the reading, except to say “R-R-Resignation!” along with the reader.

Upon its completion, however, the attendant took the letter from the departing employee, handed it to the manager, raised a fist in the air, and declared, “Viva la Tesco!”

Redditors loved the extremeness of the formal reading, especially the attendant. “‘Viva la Tesco’ is my new war cry,” one commenter wrote.

“For me, it’s how the tie is at an awkward length, above the belly button,” another mentioned. “It’s formal, but very Walmart-level formal.”

“I like the double, rolled R, hand-sweeping ‘R-R-Resignation!’ the best,” a fellow commenter offered.

One person noted, however, that others might not want a repeat performance. “The next time an employee quits, your work will be like ‘well you have to submit a form…. er, a business-casual resignation letter.'”