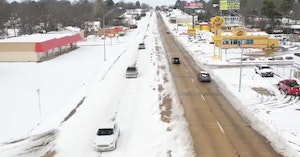 While the other 47 continental states all operate under two power grids, Texas has its own, with no federal oversight. This determination to stay separate from the rest of the country has proven catastrophic, as they are now unable to tap into other places for power as their own grid shuts down service for customers throughout the state.

Add that to Texas’s reliance on natural gas—which can’t function properly in cold temperatures—and there are clearly structural failings at play here.

But in case that wasn’t already crystal clear, a video showing the state line between Texas and Arkansas is really driving home the reality that the problems happening in Texas have been brought on by its own failed leadership.

The video was taken from the air in Texarkana, showing a thoroughly plowed street with functioning businesses on one side—the Arkansas side—and a dangerous snow-covered road with little-to-no access to commercial properties on the other—the Texas side.

The footage has encouraged the ongoing debates over whether local government is responsible for preparing for a freak storm and what could have been done to prevent the disasters currently harming Texans.

With climate change shifting our weather patterns outside of what we’ve historically known, it’s entirely possible something like this could happen again. Whether Texas will be prepared the next time or not remains to be seen — but it’s obvious the current leadership isn’t cutting it.