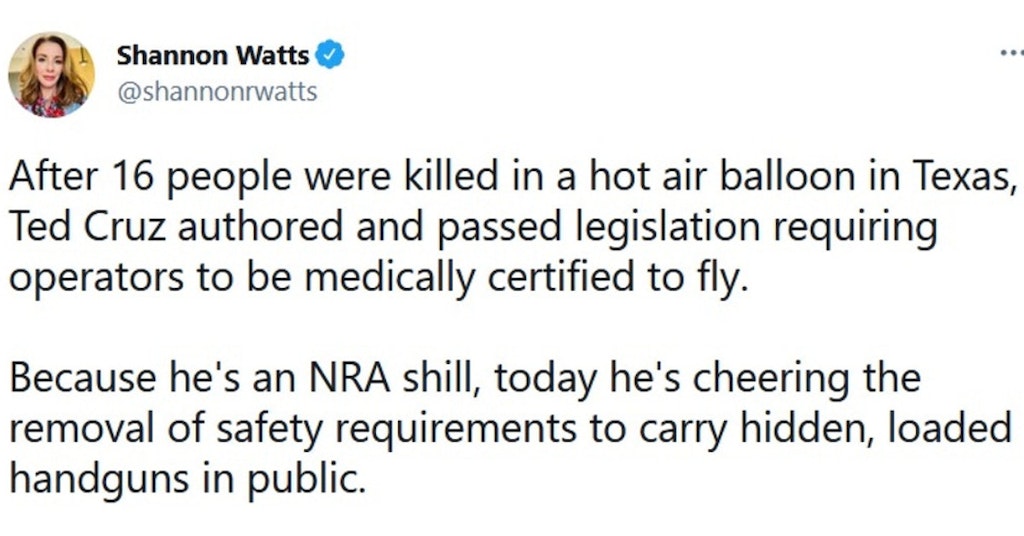 A Texas bill has passed the state House and Senate and is now on the way to Governor Greg Abbott’s desk, where it will almost certainly be signed into law, that removes requirements for permits, background checks, and safety training for handgun carriers. Supporters of the bill have called it “a simple restoration of Texans’ constitutional right under the Second Amendment,” while critics fear it will further exacerbate the horrific mass shooting problem in the U.S. as well as rising homicide rates in general.

This bill is part of a larger trend in red states in the U.S., two dozen of which have some form of law allowing citizens to carry handguns without a permit either already on the books or on the way. The Texas “constitutional carry” law, as Republicans have dubbed it, may be the most extreme and definitely applies to the most people, being a high-population state compared to most controlled by the right-wing party.

Abbott has already said that he intends to sign the bill when it reaches him in spite of a campaign asking him to veto it. Critics have said that open carry laws with no permit or background check requirements are supported by the vast majority of Texans and that the bill is opposed by “law enforcement, gun safety instructors, doctors, domestic violence victim advocates, editorial boards of major newspapers, faith leaders, veterans,” and others.

“Are you aware there are a large number of families on both sides of the aisle who are literally afraid of your legislation?” Democratic state Senator John Whitmire asked the bill’s sponsors.

Republican supporters have claimed that more people carrying around guns in public places will make communities safer in spite of vast amounts of evidence to the contrary. Unfortunately, all critics and Texans concerned for their lives in a nation where gun violence only ever seems to get worse can do now is complain, and they are doing so with gusto.

Here are just a few out of millions who absolutely hate the bill: