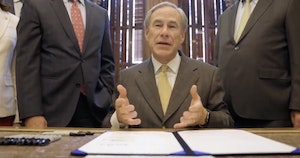 You supposedly go to school to learn things, right? Well, Republicans in Texas passed a bill on Tuesday that could effectively stop teachers from educating students about current events, racism, or white supremacy.

Republicans in the Texas House passed a bill Tuesday that bans public school teachers from talking about racism, white supremacy or current news events, specifically the concept that “one race or sex is inherently superior to another race or sex,” or the idea that “an individual, by virtue of the individual’s race or sex, bears responsibility for actions committed in the past by other members of the same race or sex.”

Additionally, teachers “may not be compelled to discuss current events or widely debated and currently controversial issues of public policy or social affairs” as part of a course. Because everyone knows that history never, ever repeats itself and that we aren’t currently living history as it happens.

And you know how sometimes teachers need to take special courses to help them improve their skills and increase their understanding of cultural issues? The bill also says that teachers don’t have to take such classes if it makes them feel any “discomfort, guilt, anguish, or any other form of psychological distress” because of their race or gender.

(I think we all know that’s code for “we don’t want white men to critically think about their privilege.”)

“The bill is written in kind of a clever way,” says Democratic state Rep. James Talarico, a critic of the bill.

Many critics believe that conservative Republicans are trying to stop the teaching of “critical race theory.” Like other theories, critical race theory is intended to provide a lens for people to examine things from everyday experiences, to the arts, to politics and history.

According to law professor and founding race theorist Kimberlé Crenshaw, “critical race theory is a practice. It’s an approach to grappling with a history of White supremacy that rejects the belief that what’s in the past is in the past, and that the laws and systems that grow from that past are detached from it.”

Even if the bill passes into law, Talarico hopes that students will smell the dishonesty from a mile away: “Students have the best B.S. meters. As an educator, you have to tell them the truth. This bill will prevent them from telling their students the truth about the country we live in. Civics is something that is so needed, and we need students to grapple with all of it.”