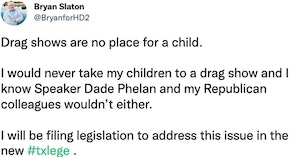 In the wake of one of the deadliest school shootings in American history, Texas Republicans are finally stepping up and taking action… against drag queens.

Yes, instead of working towards meaningful legislation that will actually keep children safe, conservatives are once again trying to blame all the problems in the United States on some of their favorite scapegoats, the LGBTQ+ community.

Rep. Bryan Slaton announced on Monday that he would be filing a bill to “ban drag shows in the presence of minors in Texas.”

In response to a viral video showing children present at a family friendly drag show in Dallas over the weekend, the virtue signaling Republican released a statement, saying:

“The events of this past weekend were horrifying and show a disturbing trend in which perverted adults are obsessed with sexualizing young children. As a father of two young children, I would never take my children to a drag show and I know Speaker Dade Phelan and the rest of my Republican colleagues wouldn’t either. Protecting our own children isn’t enough, and our responsibility as lawmakers extends to the sexualization that is happening across Texas.”

So to recap, they have a responsibility to protect children from dancers at family friendly shows attended willingly by them and their parents but not from AR-15s.

It cannot be stressed enough that the event Slaton is so upset about, cheekily named “Drag the Kids to Pride” show, was specifically set up to be something welcoming to children and excluding anything overtly sexual or inappropriate. These types of family friendly events are not uncommon, particularly during Pride month.

Parents who brought their children to celebrate Pride, see a fun show, or be exposed to new culture were greeted by angry protestors outside the venue, and all because they were watching some dancers.

If the issue is the actual content of the video, the dancing, and not just another targeted attack on the LGBTQ+ community, then it seems like Slaton should be interested in banning pop concerts, sporting events that involve cheerleaders, and general dance activities from taking place in the presence of minors, too.

Slaton was far from the only conservative to overreact and try to get parents riled up at something statistically far less likely to harm their children than gun violence, church leaders, or Republican politicians.

But others pushed back against Slaton’s proposed law and the faux outrage from the right as they try desperately to shift the news cycle away from their inaction on gun violence.

It’s also worth noting that conservatives have been circulating misinformation about the event as part of their outrage, including photos that were taken at another place at another time.