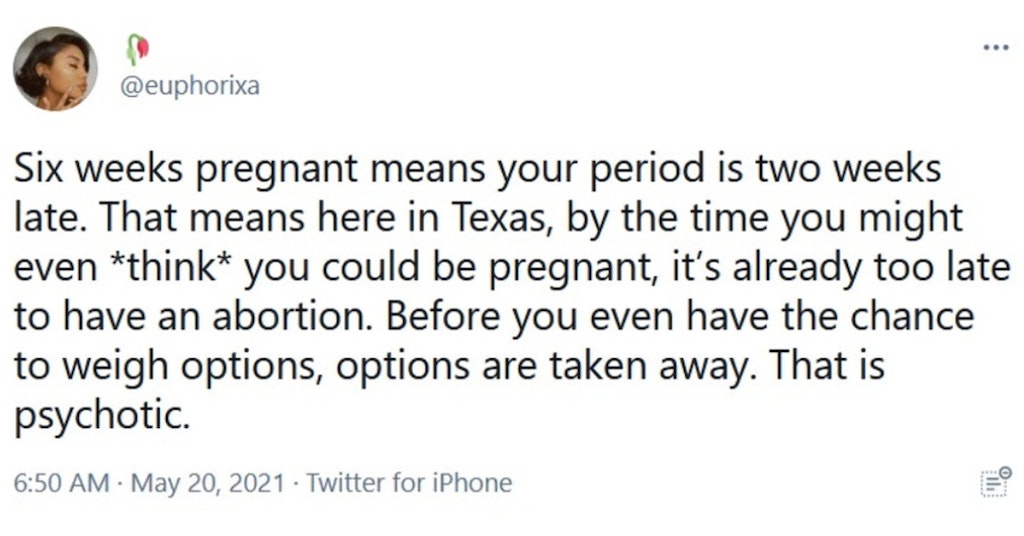 Texas Governor Greg Abbott signed his state’s latest anti-abortion bill into law, banning abortions after only six weeks of pregnancy based on the thoroughly debunked claim that a heartbeat can be detected in a human embryo at around that point of development. Not only that, it allows anyone to file lawsuits against medical staff, friends and family who help, or even an Uber driver of anyone who gets an abortion within the state’s borders.

Critics of the bill and the many that have preceded it have pointed out that unless they’re actively testing themselves for pregnancy because they want to get pregnant, people very often have no idea until, at the very least, they miss their following period. This means that by the time someone discovers an unwanted pregnancy, they are often at least four weeks along already, giving them only two weeks to schedule and receive an abortion before this strict deadline.

Not to mention the fact that medical science disputes the claim that a heartbeat can be detected at six weeks, stating that what is actually happening is some activity in what is called the “fetal pole” and that at this stage of development, the embryo (as it is called in the first eight weeks of development) has no heart. This makes the entire phrase “fetal heartbeat bill” misleading from the get-go.

No exemptions are made for instances of rape or incest.

Still, Republicans in red states continue to push and pass bills like this, only to have them struck down again and again by the Supreme Court for being unconstitutional. However, with the Supreme Court now having an undeniable conservative majority, pro-choice activists fear that challenges to these laws will bring an end to Roe v. Wade.

All of this has culminated in people absolutely hating on Abbott, the bill he signed, its supporters, and “pro-life” dishonesty and hypocrisy in general.