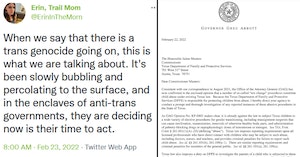 A frightening and unprecedented decree issued by Texas Governor Greg Abbott on Tuesday declares that common and harmless gender-affirming care for transgender children in the state is “child abuse” and has ordered the state’s Family and Protective Services to investigate parents who allow their trans kids to pursue this care. Furthermore, he threatened healthcare workers, teachers, and other child caregivers with prosecution if they don’t report these kids and their parents for seeking this life-saving care.

“Because the Texas Department of Family and Protective Services (DFPS) is responsible for protecting children from abuse, I hereby direct your agency to conduct a prompt and thorough investigation of any reported instances of these abusive procedures in the State of Texas,” the order reads.

Trans people across the nation, as well as their allies, have denounced these orders as being the actual abuse, saying that this will only end in countless children being forced back into the closet and, inevitably, an increase in the already shockingly high rate of suicide among trans youth.

This is the first order of its kind to appear in the U.S. and follows years of transphobic fearmongering among conservatives who claim that extremely safe and easily reversible procedures, such as the “puberty-blocking drugs” referenced in Abbot’s decree. These medications in particular have been used safely for decades on all kinds of kids for various reasons, and allow trans kids more time to determine their true gender before taking more serious steps toward gender affirmation such as surgeries.

Without puberty blockers, trans kids can find themselves developing a body that feels wrong and can result in severe gender dysphoria, mental health issues, and suicidal ideation. With this order, parents simply trying to keep their trans kids alive can now be prosecuted as abusers, ripping families apart and potentially placing these kids in dangerously transphobic foster homes or group care facilities, where abuse is actually rampant.

The backlash from people supportive of trans people and their personal choices to try and pursue their best selves and generally stay alive has been strong, with individuals and organizations strongly condemning the orders as transphobic, abusive, and even a step toward a genocidal campaign against transgender persons.