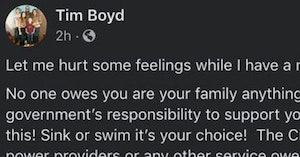 Texas Mayor Blasts Residents For Expecting Help During Winter Storm: “Only The Strong Will Survive”

Apparently, when some elected officials in the United States say they hate “socialism,” what they really mean is that they hate having any responsibility for the well-being of their constituents whatsoever.

As Texans struggle under the weight of an unusual winter storm that’s knocked out power grids across the state, left residents in dangerous and unlivable conditions, and iced over roads making it difficult if not impossible to travel, one mayor publicly ranted about the people of his town asking for help.

“Let me hurt some feelings while I have a minute!!” Tim Boyd of Colorado City wrote on Facebook, immediately shattering his future claims that people took his following words out of context.

“No one owes you [or] your family anything; nor is it the local government’s responsibility to support you during trying times like this!” he said. “Sink or swim it’s your choice! The City and County, along with power providers or any other service owes you NOTHING!”

Boyd went on to lament people “looking for a damn handout,” blamed “a socialist government” for people becoming “dependent on handouts,” and suggested everyone struggling right now figure out how to save themselves, because “God has given us the tools to support ourselves in times like this.”

“I’ll be damned if I’m going to provide for anyone that is capable of doing it themselves!” he said.

Is it a good idea for people to be prepared for storms and come up with creative solutions to keep themselves and their families safe? Of course it is. But no rational, compassionate person would suggest that means turning their backs on everyone else during a crisis because needing help is socialism, or whatever nonsense Boyd was trying to spew out with this rant.

Even if far too many politicians prefer power without responsibility, they usually at least pretend to care about the people who vote for them.

After the understandable and well-deserved outrage that followed Boyd’s post, he opted to double down on his position while also placing blame on everyone else.

A later Facebook post saw him complain that his words were taken out of context and that he apologized only for the “wording and some of the phrases” in the original statement. He also insisted that everything he said was as a regular citizen, because he secretly resigned from his job prior to the post.

Boyd then blamed people on Facebook for his wife getting fired.

“My life was laid off of her job based off the association people gave to her and the business she worked for,” he wrote, twisting himself in knots trying to lay the blame at the feet of others. But he soon followed it by saying she defended him on Facebook, suggesting she was fired due to her own decisions, not “the anger and harassment [others] have caused” her.

Both statements left people flabbergasted at the audacity of an elected official to go off like that when his constituents (sorry, former constituents) are suffering due to a crisis outside of their control — and a crisis Texas’s infrastructure wasn’t remotely prepared to handle.

Hopefully Colorado City’s next mayor actually feels some sort of compulsion to take care of the city’s residents rather than scold them for not being survivalists. And maybe one day all the other politicians who secretly feel the same way as Boyd will remember that living in a society means looking out for the most vulnerable among us, no matter how inconvenient it is, and regardless of whether there’s a massive crisis going on or not.