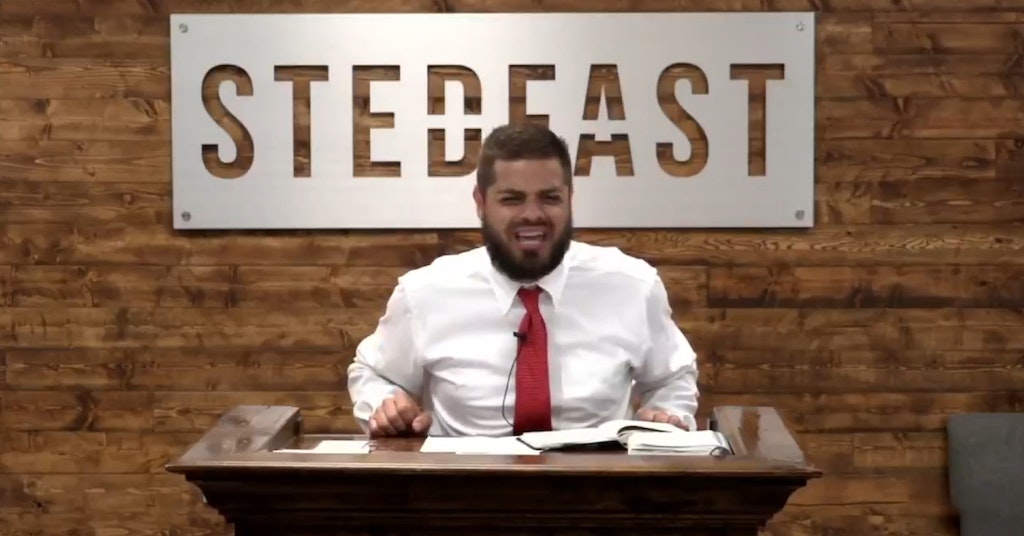 Texas Pastor Celebrates Death Of Gay Man At Pride Parade Accident: “I Hope They All Die!”

The pastor of the Stedfast Baptist Church in Hurst, Texas is drawing severe criticism for openly celebrating a fatal accident at a Florida Pride parade that killed a gay man and declaring that he wants all LGBTQ+ folks to die and then claiming that it’s them who “enjoy murder.” The extremely hateful sermon is courtesy of Jonathan Shelley, who has previously been slammed for saying that rebellion public school kids and “lazy gamers” should be stoned to death.

This guy really seems to be a big fan of murder for plenty of different types of people, but especially for LGBTQ+ people.

“It’s going beyond just saying you do all this wicked stuff,” he said, referring to Pride. “It’s saying you enjoy it. You enjoy murder. You enjoy malignity. You enjoy hating God.”

Hating God, maybe, but as far as we know, murder is not a common feature of yearly Pride events.

“Look, there’s only one group that enjoys that: It’s the Pride parades going up and down the street,” he continued. “And, you know, it’s great when trucks accidentally go through those, you know, parades. I think only one person died. So hopefully we can hope for more in the future”

Shelley was referring to an incident at the Wilton Manors, Florida Pride parade in which a pickup truck veered into a crowd of attendees, injuring two people and killing one. Though some feared that it was an intentional act meant to be an anti-LGBTQ hate crime, LGBTQ Nation reports that the President of the Fort Lauderdale’s Gay Men’s Chorus told them in an email that the driver was a member of their chorus who did not intend to attack anyone.

The driver also narrowly missed hitting a vehicle containing Rep. Debbie Wasserman Schultz, who said she was unharmed but “deeply shaken and devastated” by what happened.

Shelley, however, is not, and said that he does not care if people think his hateful, murderous statements are “mean” while dropping a homophobic slur.

“I hope they all die! I would love it if every f-g would die right now.”

Preachers like this are an unfortunate but necessary reminder that homophobia is still rampant throughout many parts of the U.S. and remains a danger to all queer people. The increasing trend of right-wingers driving vehicles through crowds of protesters, whether they be for Black Lives Matter or something else conservatives don’t like, combined with these statements are making many LGBTQ+ folks understandably uneasy about celebrating themselves.

The good news is that plenty of people, including straight folks and real Christians, came out to condemn Shelley’s hate.