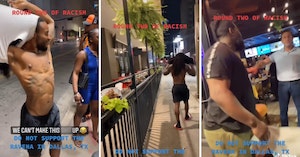 A viral video appears to show a group of Black would-be restaurant patrons being refused service by a white manager twice, first because one of the men was wearing a muscle shirt and then, after he changed into a t-shirt, being refused again for no discernible reason. The banning of “muscle shirts” at restaurants and other supposedly “high class” establishments has long been recognized by anti-racist groups as being an anti-Black rule, as these kinds of white tank tops are often part of the stereotype of the scary Black man.

But when the group is refused again, they really have nowhere to go except to assume that they are being denied entry for their skin color.

Previous videos from the night suggest that this was a family birthday dinner for the TikTok user’s mom, but the evening was derailed when they were informed that the restaurant dress code says that muscle shirts are not allowed. When they pointed out that many of the women in their group were wearing tank tops, they were informed that this was acceptable for women and not for men, which is sexist on top of racist if you ask us.

Undeterred, the family came up with an easy solution. The man with the tank top simply switches shirts with the mom who was wearing a simple t-shirt so that they would be following the rules and could have a nice dinner at the table they reserved. The family is clearly having some fun with it, joking and laughing even knowing that they just experienced racism. However, when they try to go back in, the white manager of the Italian restaurant Ravenna Italian Grille & Bar in downtown Dallas blocks their path.

The manager is inaudible as he speaks to the understandably angry prospective patrons, but when they protest this treatment after going out of their way to follow the rules, he walks away, gives the family the finger, and starts making a phone call. Everyone watching assumes he was calling the police because this is America.

The previous videos from what appears to be a group vacation show multiple incidents of racism like this, causing one of the party to declare that “we’ve been Black-blocked all weekend.”

“I’ve been following this vacation and what I truly see is people being intimidated by a large group of black people,” writes one commenter. “It’s bulls–t.”

After the video started going viral on TikTok and Twitter, Ravenna started getting review-bombed by people accusing them of racism or posting hilarious one-star reviews about well-dressed cockroaches coming out of the food and assaulting them.

“I tried my best to read the 1619 project by Nikole Hannah-Jones during my dinner at this ungodly establishment, but the food and service were so repulsive that I was forced to leave and find a suitable establishment that could accommodate my desire for a fantastic meal with an atmosphere of inclusivity,” wrote one Yelp reviewer.