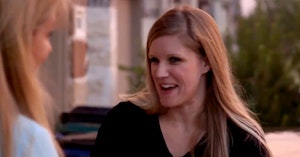 A resurfaced clip of a woman being surprisingly earnest when asked why she doesn’t want affordable housing in her neighborhood, saying that she doesn’t like the idea of people who aren’t in the “same class” as her being around, has gone viral in less than 24 hours after being posted to Twitter. With nearly two million views already, the video has sparked widespread discussion over class politics.

The clip comes from a PBS report titled Poverty, Politics, and Profit which explores how so many people are unable to access affordable housing even as local governments seem to spend billions on it. It was originally published in 2017 but has resurfaced during a time when the public is suffering from mass evictions during a pandemic and subsequent economic crisis.

“The lifestyle that goes with Section A is usually working single-moms or people who are struggling to keep their heads above water,” the woman says. “I feel so bad saying that… but it’s not people who are of the same class as us. It sounds bad but I don’t mean that in a bad way.”

It’s unclear how she could possibly mean that in a good way.

When asked if she might be stereotyping people who need affordable housing, the woman immediately admits that she is.

“Oh I totally am, 100 percent,” she says. “I’m definitely not a racist or a bigot but I hold a little bit of a stigma against people who are different.”

To be clear, holding a stigma against people who are different than you is pretty much the definition of bigotry.

As of 2019, one in six households in the U.S. was spending more than half of their income on rent or mortgage payments. In 2018, only nine percent of newly built apartments rented for less than $1050 per month. People are often on waiting lists for years before being accepted into subsidized or affordable housing units.

Although race is not specifically brought up in the clip, the woman does say she doesn’t want “nomads” around and pretty much everyone familiar with racism thinks that is what she’s dancing around.