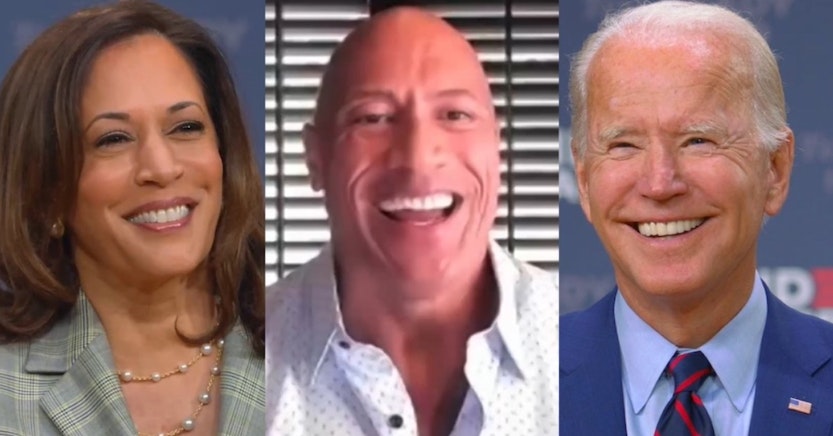 Dwayne “The Rock” Johnson has been fairly private about his political affiliations over the years, but it seems those days have come to an end. The wrestler-turned-actor has come out in support of Joe Biden and Kamala Harris, and it’s safe to say his conservative fans are less than thrilled.

The Jumanji star shared a video to Instagram on Sunday morning, saying in the caption that “as a political independent and centrist for many years, I’ve voted for Democrats in the past and as well as Republican.”

He continued: “In this critical election, I believe Joe Biden and Kamala Harris are the best to lead our country, and as my first ever (public) Presidential endorsement, I proudly endorse them for the presidential office of our United States.”

The Rock also mentioned that “progress takes courage, humanity, empathy, strength, grit, kindness and respect,” alluding to the likelihood that he’s endorsing the Democratic ticket because President Trump has chipped away at all of those things, ultimately standing for the exact opposite.

The video itself is a nearly six-minute conversation with Biden and Harris about how they will earn the respect and trust of Americans, bookended by The Rock’s own thoughts about politics and his values.

It’s a thoughtful conversation, but one that drew the ire of many conservative fans who expressed their disappointment with seeing Johnson take a stand for what he believes in.

Fortunately, for everyone upset about The Rock’s decision, there were plenty of thanks, as well.

And of course, this about sums it up: