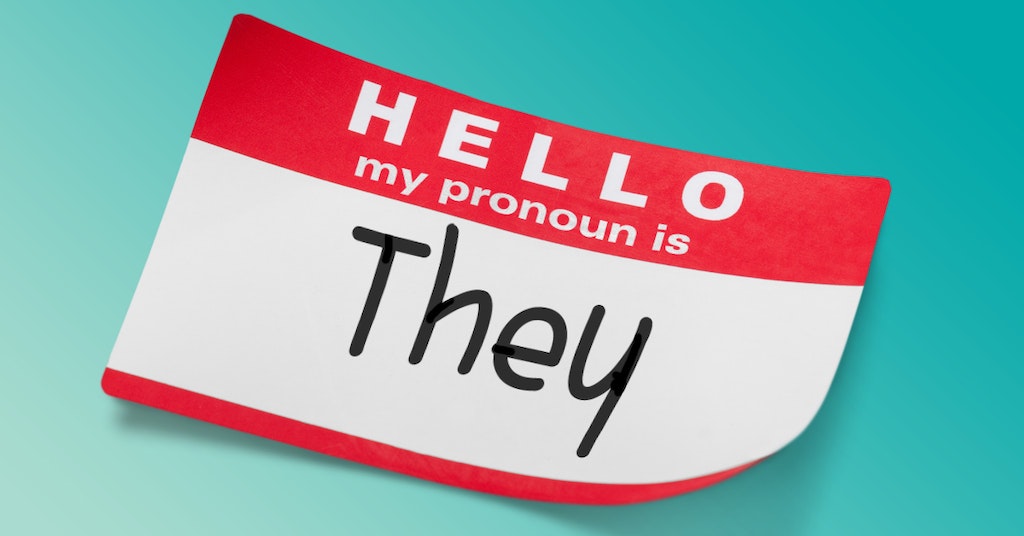 Nonbinary Pronoun “They” Named Merriam-Webster’s Word Of The Year

Language is getting a necessary update, folks, and Merriam-Webster is here to prove it: “They” has become 2019’s word of the year. So, for all you naysayers who complain about the oh-so-confusing and shockingly incorrect use of “they” instead of the “she” and “he” pronouns, you just got shut down by THE institution in charge of language. AKA the people themselves.

The word ‘they’
– was looked up 313% more this year than last.
– had a new sense added in September.
– is increasingly common in both public and personal communication.

What does “They” mean?

According to Merriam-Webster, ‘They‘ is “used to refer to a single person whose gender identity is nonbinary.” And, just in case you’re wondering, “nonbinary” means, “relating to or being a person who identifies with or expresses a gender identity that is neither entirely male nor entirely female.”

I have no problem using they/them pronouns instead of she/he or him/her. What’s the big deal?

Merriam-Webster, I’m so sorry what is going to happen to your mentions.

Transphobes in the comments: They is a perfectly acceptable singular pronoun, and has been since the 14th century. Singular They existed before the plural. Respecting someone’s pronouns is also free.

Singer-songwriter Sam Smith recently revealed that they are nonbinary, and this statement, along with many others, influenced “they” becoming the word of the year.

Sam Smith and other gender-nonconforming people helped make ‘they’ Merriam-Webster’s 2019 word of the year https://t.co/3a32gL3rUk

But it’s not just Sam Smith. Plenty of people have come out as gender nonconfirming.

I find it interesting that all the articles about Merriam Webster making "They" the word of the year have featured images of Sam Smith.

There are prominent queer and trans folx of color who've been using they/them too.

Language evolves. We should too.

The word’s popularity actually spiked by a whopping 313 percent.

According to Peter Sokolowski, Merriam-Webster’s editor at large, “I have to say it’s surprising to me. It’s a word we all know and love. So many people were talking about this word.”

For context, last year’s word of the year was “justice.” 2017’s was “feminism.” It’s really looking like our language is reflecting our ideas, huh?

Even though there are plenty of people who argue “they” is not grammatically correct, the word of the year proves that people don’t need rules or institutions to tell them how to express themselves.

Of course, not everybody (boomers) was on board with this progression.

Just use male or female. Weirdos.

I’ll be unfollowing you now

As someone who identifies as a football this means a lot 🙌🙌🙌🙌

But most are loving the use of They.

I, for one, love that a group dedicated to tracking and cataloguing our language remains cognizant of social change and works to keep us aware of how that change updates our language. https://t.co/H6PZoAsvye

One of the things I like about #they as a personal pronoun is that it makes clear that we all contain multitudes. We are all they/them, if we are honest with ourselves. There needs to be more awareness of humans' complexity. Hope this helps. https://t.co/zFhX6mS8hD

merriam-webster just announced their word of the year is the singular pronoun "THEY" for 2019!#suckit, bigots.

Cue all of the non-easily offended middle aged white men to completely lose their shit, claiming that basic respect has just gone too far