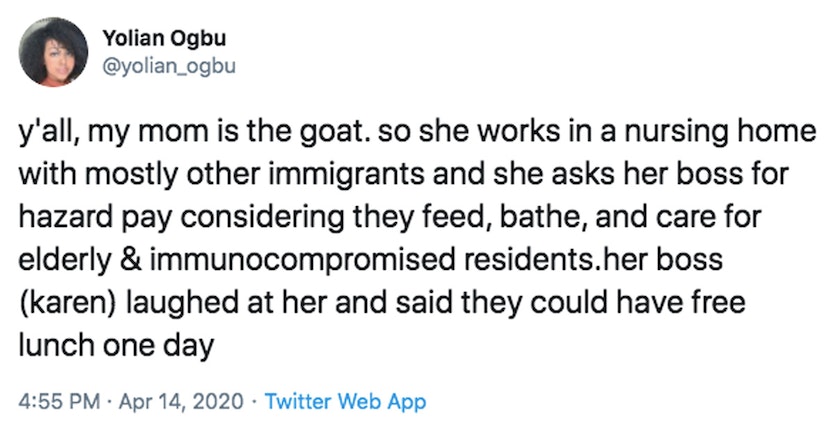 At this point in the coronavirus crisis, everyone with a fragment of a heart beating in their chest has realized that grocery and delivery workers are deeply underpaid and undervalued — both in general and when they’re some of the only folks still working through a global pandemic.

But there are so many others who aren’t getting what they deserve despite holding down the fort while as many of us as possible shelter safely inside our homes.

Yolian Ogbu shared one such story on Twitter this week, and it’s a total inspiration.

Ogbu’s mother works in a nursing home, and she asked her boss for hazard pay since she and her coworkers are not only still having to come into work, but have to maintain close contact with the residents they’re taking care of.

“Her boss (Karen) laughed at her and said they could have free lunch one day,” Ogbu wrote.

But her mom was having none of that dismissive nonsense.

“My mom and her coworkers were so fed up because they get paid next to nothing for taking care of all these people,” Ogbu said, pointing out that they’re also literally risking their lives right now to keep coming into work.

So her mom decided to call in “sick” as an act of protest for the unfair treatment.

And then everyone else on her team did the exact same thing.

Her boss freaked out.

The regional director had to get involved, and Ogbu said he begged her mother and the rest of her team to come back to work — with hazard pay.

People were quick to rally around Ogbu’s gloriously bold mother.

But Ogbu’s story illustrates a bigger point as well.

Everything is terrible right now, and a lot of people aren’t sure where their next paycheck is coming from. But those who are still working—who already know the job, who have special skills, or who have already proven reliable during this messed up time—are in a unique position. They are not replaceable, and they are desperately needed right now.

If there was ever a time to band together and demand better wages, better conditions, for essential workers, it would certainly be now.