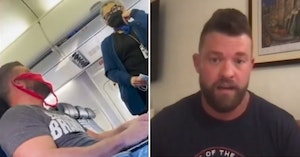 Florida Man Wears Thong On His Face To Protest Airline Rule, Compares Himself To Rosa Parks

A white anti-masker compared himself to Civil Rights legend Rosa Parks after he was kicked off a flight for wearing a bright red thong on his face instead of a proper mask. It’s unclear if he wore the thong through the entire airport or why he was let on the plane in the first place like that, but you might want to reconsider if you’re flying out of the Cape Coral, Florida area on Spirit Airlines. Now that he’s been banned from United, that’s where he says he plans to stage his embarrassing “protest” next.

Adam Jenne apparently thinks that taking basic safety measures during a pandemic is “absurd,” so decided to start “protesting” by humiliating himself on multiple flights. Perhaps the most disturbing part of this story is that he had already pulled this stunt on multiple flights without getting kicked off the plane and out of airports. Either that, or the fact that multiple passengers left the flight in support of Jenne, one claiming that the “protester” was removed for wearing a mask.

He was actually removed because a thong is not an appropriate mask and likely does very little to protect others from the COVID viruses probably teeming in his spit.

Jenne apparently has a problem with allowing passengers to temporarily remove masks to snack and drink once the plane is level. There is a discussion that can be had over when and whether this is an appropriate risk to take and how we can balance that with people’s need to eat and hydrate, but throwing out mask rules altogether as the new hyper-infectious omicron variant threatens to once again overwhelm our healthcare system also seems absurd.

And really, it sounds more like this guy just wanted his 15 minutes.

“Everything else that has sparked change in this country has started from everyday people,” Jenne told local news media. “Rosa Parks wasn’t famous. She changed the course of history.”

The difference of course being that Jenne and other people who think they’re too important to wear a bit of normal cloth over their faces while in public spaces for the sake of fewer people dying of COVID are not oppressed, no matter how much they might wish it so.

Jenne further claimed that some flights he had been on with the thong were staffed by people who were delighted to see a passenger wearing underwear on his face.

“Every single flight has been met with different reactions from the flight crew. Some with a wild appreciation, others confrontational.”

It seems highly unlikely that anybody reacted with “wild appreciation,” and he was probably mistaking nervous laughter or that laughter you experience when you’re at work and a customer has pushed you to the very limits of your sanity for genuine amusement or approval. If that happened at all.

United Airlines has banned Jenne from any of their flights pending a review of the “incident,” and the company released a statement supporting the flight staff who decided to remove him from the plane.

“The customer clearly wasn’t in compliance with the federal mask mandate, and we appreciate that our team addressed the issue on the ground prior to takeoff, avoiding any potential disruptions on the air,” they said.