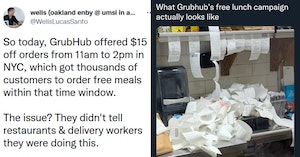 A viral Twitter thread has exposed the downside to those occasions in which GrubHub, a popular food delivery service, offers customers $15 off on lunch during a short window in the day. This offer is rather enticing, often covering the full cost of the meal for individuals, but it turns out that it’s a nightmare for local restaurants who are not informed of these events beforehand, resulting in them getting more orders than they could possibly fill.

The problems that this causes can erase any benefits that the establishments might enjoy from the boost in business as angry customers take the preventable problem out on them.

“Giving folks $15 off is great! But it’s a serious problem when you time-limit it, because that means you’re forcing users to all order at the same time,” wrote AI justice educator and threat author Wells Lucas Santo. “Take a moment to consider why this might not be a good thing… especially if understaffed restaurants aren’t made aware.”

According to Santos, businesses don’t consent to these deals and often aren’t even informed that they’re going to happen, so they can’t even keep extra staff on hand for the event.

The fact that people only have three hours in which to place the orders that will get the $15 off benefit only squeezes the businesses and their already tired workers further.

“Because of the pandemic, restaurants have been understaffed & fulfilling large quantities of orders has already been difficult,” Santos points out. “Imagine this being amplified by thousands of people getting a free meal deal that they have to use today.”

Still, restaurants make the attempt to fulfill as many orders as they can. That’s where the other problem comes in. GrubHub apparently isn’t even making sure that there are enough drivers on hand for these events, which means that often times fully prepared orders are left to go to waste, cutting into the business’ food budget and wasting the cooks’ time as customers are refunded.

To make things worse, people blame the local restaurants for the problems created by GrubHub and suffer the consequences in the form of lost future business and bad reviews.

All of this interferes with a restaurant’s ability to pay attention to their normal customers who came to the physical location hoping for a normal day’s service, only to find the kitchen overwhelmed with orders that might not even be delivered.

“So what ends up happening if we get a lot of orders is that we have to make this large quantity — more than we normally can — and this stalls what we can make for in-store orders. When no one picks it up, we spent time making wasted orders & people in-store don’t get theirs.”

Santo further explains that this is highly demoralizing to restaurant owners and workers who would truly like people to actually get to eat the food they make and enjoy it rather than everyone enduring this GrubHub nightmare. Meanwhile, GrubHub still gets a profit boost from the extra business and suffers no consequences for leaving small local businesses to panic because they got literally 200 orders in the space of five minutes.

The BuzzFeed article he included mentions a worker at one such restaurant who was only supposed to be packing to-go orders calling an Uber so that she could deliver 11 orders personally — with no pay from GrubHub and probably no tips. She referred to this situation with one word, all caps: “INSANITY.”

Customers, meanwhile, referred to a recent promotion of this kind by the company as a “complete disaster,” “extremely poorly thought out,” and a “[poop emoji] show.”

GrubHub’s statement to BuzzFeed didn’t seem to fully appreciate the enormity of the problems they caused that day.

“It’s clear, New Yorkers were hungry for lunch!” they said. “While we knew 72% of New York workers call lunch the most important meal of the day, our free lunch promotion exceeded all expectations.”

Is this really a beneficial service to humanity? People don’t seem to like what it’s doing to us.