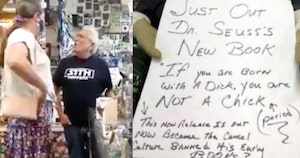 Councilwoman Tiesa Meskis was filmed confronting the owner of a Star Wars memorabilia store, Sucher & Sons Star Wars Shop, in Aberdeen, Washington, after noticing a sign he had hung that is extremely transphobic. Local news affiliate King 5 reports Meskis is a trans woman herself and was deeply offended by the sign, which she called “demeaning.”

The sign, written by own Don Sucher, read “If you are born with a d-ck, you are not a chick,” and attributed the rhyme to Dr. Seuss, saying it was one of his books that was finally being released after “cancel culture” tried to keep it from being published. Sucher has a very vivid and nonsensical imagination that he uses to be transphobic, apparently.

“What he wrote there was so demeaning and so dismissive of who I am, who any trans woman is,” said Meskis. SHe told Sucher he was a bigot in the viral video clip of their confrontation. When he told her to leave, she did, but the argument continued in the street.

“Trans women are women,” she yells at him, to which he responds, “You’re nuts.”

Sucher told King 5, “I don’t care what they do, but don’t come in here and complain to me about stuff. I have free speech.”

Meski agrees that Sucher has a right to free speech, but she wanted him to hear directly that his sign causes harm. “We are people. We are who we are and we all want to be accepted in our community,” she told reporters.

When he heard that, Sucher said, “I don’t give a [expletive] about feelings anymore. I went to Vietnam to fight for all this [expletive]. Do you think I care about some [expletive] feeling? Absolutely not!”