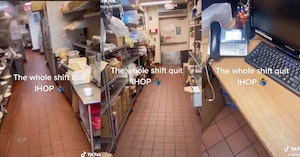 An IHOP customer who just wanted some bacon instead found himself touring the deserted remains of the restaurant’s kitchen, as it appeared all of the workers just up and quit in the middle of their shift.

@dj20grand filmed his exploration of the empty space, initially highlighting food and equipment ditched mid-use in the industrial kitchen. “I don’t know where the f—k everybody is,” he says.

He eventually theorizes that “everybody quit” as a phone rings incessantly in the background.

As he’d already come this far, @dj20grand apparently didn’t see any good reason why he shouldn’t walk right over to the open office and answer the phone, since nobody else seemed to be around to take the call.

“Thank you for calling IHOP,” he says, introducing himself.

Whatever the person on the other line says, he replies by admitting he doesn’t even work there and is simply walking around the back because “everybody walked the f—k out of this motherf—ker.”

“I’m dead the f—k serious,” he continues. “I don’t know where nobody’s at. I’m fixing to start grabbing bacon. You need to get the f—k up here.”

He then tells the mystery caller that actually, he’s going to get out of there before someone calls the police “on my stupid ass” — and with perfect timing, another human finally appears in the doorway.

The new guy claims the office is his and seems confused as to what @dj20grand is up to, but the TikToker is ultimately able to leave without a fuss, even helping to seat a party of two on the way out…even though it doesn’t seem as if there’s anyone around to actually serve them.

Much has been made in the last few months about restaurant workers quitting at record rates. People are done working minimum wage (or below) while putting up with rude customers, inept managers, AND a pandemic on top of everything else.

So rather than listen to self-righteous strangers insist that if they don’t like the working conditions they should just quit, people actually have been up and quitting — often leading to those same people complaining that their orders now take longer because so many places are understaffed.

The hilarity of it all hasn’t been lost on TikTok viewers, who readily poke fun at capitalism backfiring in the faces of those who don’t think restaurant workers are worth a better hourly rate.

“I love this,” @ashleetn commented on the IHOP video. “These businesses will be forced to pay people more. And before anyone talks about prices going up news flash they have been.”

“‘If you don’t like working there then quit.’ Now y’all mad??” asked another viewer.

While some folks expressed their beliefs that all this understaffing is going to go back to normal as soon as government benefits tied to COVID run out — suggesting people are just being lazy in the meantime — not everyone agreed.

One TikToker said that “people who say they lazy for quittin probably never worked fast food with bad management and it shows.”

“This is gonna happen a lot more,” another wrote. “People are tired of being unappreciated.”