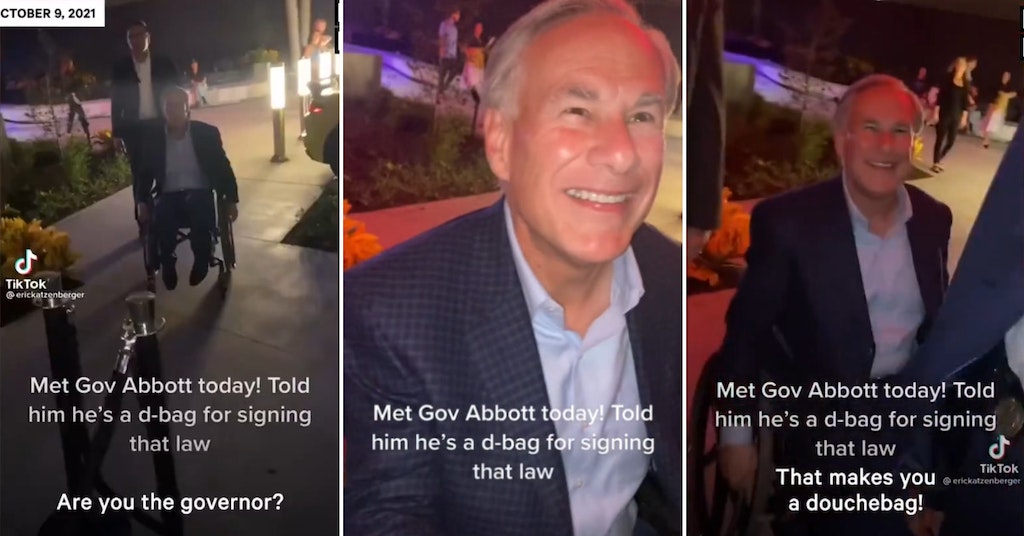 Texas TikTok User Feigns Excitement To Meet Greg Abbott, Call Him A ‘Douchebag’ To His Face

Living out the fantasy of many a human being who has ever engaged in politics, TikTok user Eric Katzenberger somehow managed to get a quick face-to-face with Texas Governor Greg Abbott just long enough to look into his eyes and call him a douchebag. Thankfully, he filmed this encounter so that the rest of us could enjoy it vicariously.

Katzenberger was able to get up close to Abbott as he was leaving some sort of fancy event, perhaps another schmoozing with his billionaire donors, by putting on a quality act of excitement at running into the man who runs the entire state, complete with squeaking voice. He then delivered a message that many, if not all, pro-choice individuals would like to personally present to the guy who signed one of the most messed up anti-abortion laws ever dreamed up by U.S. Republicans.

“Why would sign a law telling women whether they can have an abortion or not?” asks Katzenberger in the same fake enthusiastic voice as Abbott continues to grin. “That makes you a douchebag!”

The Texas six-week abortion ban remains in effect in the state after an appeals court overturned a judge’s ruling that temporarily suspended the new law on the basis that it violates the essence of Roe v. Wade, because it absolutely does. Bounty lawsuits against the state’s few abortion doctors have already begun as pro-choice activists continue the fight against this violation of basic human rights on the ground.

On Tuesday, video footage was released in which Abbott can be heard bragging that “we’ve outlawed abortion in Texas” and suggesting that “maybe” they could outlaw birth control next.

He also spoke on another bizarre bill he’s passed, which he called a “Trigger Bill,” that will skip the entire legislative process and automatically make all abortion illegal in Texas the moment the Supreme Court makes a ruling that overturns Roe v. Wade.

“What it means is that if any other state files a lawsuit that the Supreme Court strikes down Roe v. Wade, abortion is immediately abolished in Texas without us [going into] session.”

It’s like Republicans are just writing down their fondest wishes and Abbott is passing them into law without any regard for the actual law. It’s no wonder that, in spite of him just recently joining TikTok, Katzenberger’s video has already spread to Twitter and gained over a million views on another TikTok account.