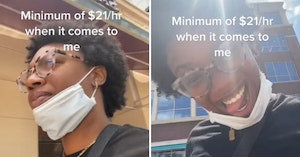 A TikTok video has blown up after a young woman told the story of how she walked out of an interview for a management position at a Family Dollar location because they couldn’t meet her salary requirements. Her simple refusal to settle for less than she knew she was worth has kicked off some discussion in the comments as people reveal that the new labor movement in the U.S. still has work to do to convince folks that they’re worth more than they’re being offered.

“So, Family Dollar had a hiring event, and they were hiring for assistant store managers and store managers,” said TikTok user Jayla. “So, you know, I go through there, ask my typical questions.”

The answers about hours, turnover rate, and expected weekly sales all satisfied Jayla well enough, but things came to a sudden halt when the hiring manager informed her that they simply couldn’t do $21 per hour for a management position.

“Personally, I was like ‘well, I’m gonna adjust this for inflation, pandemic, all that,’ I said that out loud, and I was like ‘I feel like $21 is a reasonable amount for all the work you just described that I would have to be doing in this position.'”

“And he said ‘I can’t do 21,’ and I was just like, I literally just stood up and I said ‘okay, thank you for your time, and good luck finding someone that’s gonna work for that little bit of money.'”

It takes a certain amount of bravery to turn down even poor pay in today’s world, where the price of everything is going up, especially when it comes to housing, and it’s getting more and more difficult to make ends meet. The U.S. federal minimum wage has stagnated at $7.25 per hour since 2009 in spite of a brutal recession, a pandemic, and a number of market factors that have exploded the cost of living.

While some areas have increased the local minimum wage, when it comes to retail and service industry jobs, pay anywhere, even for managers, isn’t keeping up with prices as capitalists continue to try and force people to expect and accept less than survival wages. The only way to fight this is for workers to refuse to accept it and demand better for themselves and their working class comrades.

This starts with people like Jayla knowing what they’re worth and walking away when offered less — something a few commenters could use a lesson in if things are ever to get better for the country’s actual workers.

“Why would [you] go to family dollar expecting $21 an hour lol,” wrote one TikTok user. “You playing games with them, I love it.”

While “dollar store” chains like Family Dollar are notorious for underpaying their staff, that’s all the more reason to begin challenging them on this point. As another commenter pointed out, Jayla’s actions serve as an indication to the people hiring that they are not offering enough to hire good people who are clearly confident, self-assured, and carry other good management traits.

“This is how we change the game,” they said. “If multiple ppl show up for interviews and walk out after the wage isn’t good enough they would raise it.”

Others suggested that Jayla is far better off not working for Family Dollar at any pay rate considering the conditions their workers are subjected to. A similar chair, Dollar General, has been so intensely understaffed that multiple TikTok videos have been popping up to show freight containers packed with goods yet to be shelved because nobody has time to do it and there’s no place to store all the extra.

“Naw u dodged a bullet, working at family dollar is hell,” reported another commenter.

Both Dollar General and Dollar Tree, which owns Family Dollar, make billions annually in profits and their CEOs enjoy multi-million dollar salaries far removed from the workers who actually operate their stores, allowing these profits to happen.