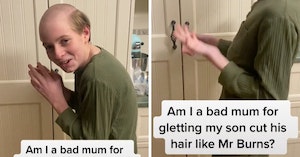 A six-second TikTok video went unexpectedly viral when a semi-popular user posted an unusual entry to her account asking if she had messed up by giving in to a request by her son to give him the “Mr. Burns” when it came time for a haircut.

C. Montgomery Burns, more commonly known as Mr. Burns (to you), is a well-known character on The Simpsons, playing the part of the heartless billionaire who owns the local nuclear power plant and has an iconic balding hairstyle.

It remains unknown why the child of TikTok user Johanna Clark wanted his hair to look like this. All we can say for sure is that his imitation of Burns saying the name of his sycophantic assistant, Mr. Smithers, is the best we’ve ever heard.

He even does the classic hand-tenting gesture that comes out any time Mr. Burns‘ fiendish plots are going as planned, often to the tune of “excellent.”

“Am I a bad mum for [letting] my son cut hi hair like Mr. Burns?” the overlay text asks.

There remains very little information on the haircut, with viewers left to guess what the reason was for Clark’s son wanting the cut, whether it was to stay or part of a transition to a full shave, or how his schoolmates reacted to the new do. All that has been said is that her son wanted and loves the cut, responding to a comment that it made his day.

In addition to Mr. Burns, Clark compared the look to that of Gargamel, the main bag guy from The Smurfs, or Lemony Snicket, by which we assume she meant the villain from the book series by the author who writes under, Count Olaf of A Series of Unfortunate Events. Both characters are similarly balding.

The brief video has gained over 6.4 million views over the month of July, and most commenters seem to agree that Clark is not a bad mom for allowing this. In fact, many feel that her willingness to allow her son to explore, express himself, and be silly with a part of his own person — particularly one that will grow back anyway — makes her a good mom. And clearly, this kid is going to be a star.

Many childhood development experts recommend allowing children some autonomy in how they dress and keep their hair, and allowing increasing autonomy in this respect as kids age. Doing so both increases their sense of ownership over their own bodies — an essential lesson to avoid future abuse — and helps them develop their sense of identity and self. Further, by displaying trust in your children to make their own decisions, you can increase their feeling of trust in you.

“As parents, our goal is to raise children in an environment of acceptance, love, and security,” says psychotherapist Dr. Courtney Glickman. “We hope they grow into confident people that are authentic and value themselves. Something as simple as letting your child choose their own hairstyle can set the foundation for this to occur. You, as a parent, are modeling your trust in your child’s choices, your unconditional acceptance of them, and encouragement of their individual expression of self.”

And if it becomes a problem, it will be one that solves itself in time.

“Hair grows back!!!” commented one fellow mom. “Love it. My sons have had control of there hair cuts since 5. It’s been fun.”