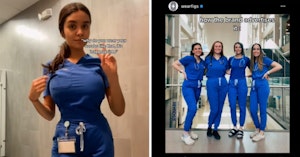 A nurse on TikTok got a discussion on different types of bodies going, particularly ones deemed “inappropriate,” within our society by complaining about the way people react to her in scrubs when she wears the ones that fit her. The young woman is fairly tiny, reporting that she generally wears extra small sizes of clothing, but has proportionately large breasts.

This has apparently caused some issues with people who want to comment on her body. Scrubs aren’t generally designed to allow for extra room in that area, and anyone who’s worked in scrubs knows that wearing a size up can cause problems with comfort or even safety and sanitation. The result on Erika Diaz compelled her to make a TikTok video calling out people who have a problem with it.

Diaz gained over 12.3 million views with this one video as people began to debate in the comments.

In the video description, Diaz complains that “some people just have an issue with my body not my scrubs and it shows.” Overlay text suggests that people have been saying things to her like “why do you wear your scrubs like that, it’s inappropriate.”

But Diaz is just wearing the scrubs that fit her the way anybody else would. She highlights this by showing how women look wearing this particular brand of scrubs in the promotional materials, but none of the models happen to have a body type like hers. People sexualizing Diaz therefore can’t blame her for what she is wearing, but must blame themselves for how they perceive and judge her based on her body.

Diaz not only works as a nurse but also works a side job, is going to school, and does volunteer work in whatever spare time she somehow has left over. Still, people online have been making judgments about her, even apparently accusing her of somehow altering her body or “faking” the way she looks.

“Just for clarification i am 5’2” and 107 lbs [I’m] short and little, y’all can say my body is fake all y’all want it’s not ask my back problems,” she wrote in a follow-up comment. “I literally work 2 jobs, volunteer and i am still studying im devoting my life to the improvement of others and anyones opinions are irrelevant [sic].”

In spite of this, many commenters have suggested to Diaz that she simply wears a size up, completely missing her point. Even if somehow it had not occurred to this nurse that clothing comes in different sizes that she could try, the point is that as long as she can do her job well, what her scrubs look like on her body is nobody’s business.

Other TikTok users also seem to be unable to grasp the idea that the reason the scrubs look looser on other women is because their chests aren’t using up most of the extra space, tightening the fabric around her waist. You know, basic physics. Diaz has even taken the time to show in other videos that yes, her waist is indeed this size.

The idea that she’s lying and choosing to look a certain way that society happens to sexualize also bumps up against some pretty racist stereotypes around Latina women, and it would be condescending to assume that these TikTok users don’t understand this. Regardless, no women should have to jump through hoops to justify the existence of their bodies.

Thankfully, at least some other women spoke up to defend Diaz from the more ignorant and/or terrible users of the platform.

“She’s not the problem, people sexualising her for something she can’t control are the problem,” wrote one such user.

“I ain’t remember the last time I cared what a NURSE looks like when they’re helping me,” commented another, “regardless if you’re a patient or an employee.”