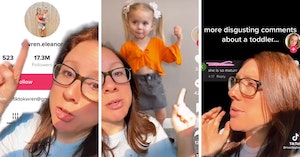 ‘Keep Your Children Off The Internet!’—TikToker Explains Why Parents Should Stop Posting Videos Of Their Kids Online

A mother’s concern is reminding people to be careful about sharing images of their young children online.

A video from @hashtagfacts drew attention to how those videos might be being misused, and attracting the wrong kind of attention.

“They have 17.3 million followers, which I had a hard time wrapping my head around. It’s just videos of a toddler,” she said. “What moms are noticing is how many times these videos of Wren are being saved.”

She showed a few examples, including a video of the child playing with a wrapped tampon that that had been saved 10,000 times, compared to receiving 4500 comments, and another of her eating a hot dog that had been daved almost 375,000 times.

Coupled with odd search terms and gross comments, parents started feeling like something was wrong. The conversation has encouraged many, including @hashtag facts, to look at videos or pictures they’ve shared of their own children and see if there has been any concerning interactions from strangers.

“The issue with all of the saves and the follows are that people are watching your children and doing disgusting things,” the TikToker said. “Protect your kids.”

This is only the tip of the iceberg of the internet investigation that has delved into this, whether regarding Wren specifically or other children whose parents have never even considered that these images might be misused by ill-intentioned strangers.

@hashtagfacts has also drawn attention to the harassment and difficulties she’s faced on TikTok since posting about this situation and suggesting parents refrain from posting content of their children online.

She also explained where to look for data about what the demographic makeup of your audience is if you are concerned that videos might be attracting the wrong kinds of attention. But the simplest way of handling things is just not blasting photos and videos of your kids out to the world. When they’re old enough, that’s a decision they can make for themselves.