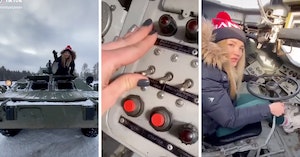 You can find just about any type of video on TikTok, and in a jarring example of the times, that includes instructions on how to drive a Russian military vehicle that just might be lying around.

A video from Russian influencer Nastya Tuman has been making the rounds online, inaccurately billed as a Ukrainian showing her fellow countrymen how to make use of abandoned tanks.

In actuality, Tuman is a car mechanic who has posted a number of videos involving fixing vehicles to get them up and running. She recently reposted an old video from 2021 showing how to drive a Russian armored personnel carrier, gaining attention from those keeping tabs on the Russian invasion of Ukraine.

“If you happen to find a free or abandoned armored personnel carrier, here’s a life-hack on how to start it,” she says in Russian, a different introduction than was present in the original video.

It’s unclear what Tuman’s intentions with re-uploading the video for modern times were, but it still sparked discussion among those keeping close tabs on the social media aspect of the Russian invasion into Ukraine.

We’ve already seen a number of examples of Ukrainian citizens interacting with Russian military vehicles in the few days since the invasion began, from blocking paths with their bodies to allegedly actually stealing the vehicles.

The spread of misinformation about things happening in Ukraine and Russia is particularly rampant on social media, making it harder to know what to make of videos like Tuman’s when they begin to circulate with a specific unverified story attached, but the fact that it didn’t seem far-fetched for tank tutorials to be circulating on Ukrainian TikTok just goes to show how strange and dystopian things are right now.