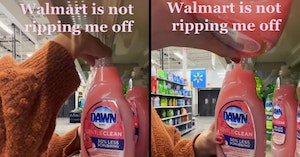 A TikToker’s video showing her tampering with soap at Walmart has viewers torn.

Shortly before Christmas, @chemical.xxx posted a video in which she poured off brand pink dish soap into a similarly colored Dawn brand dish soap while shopping at Walmart.

“Walmart is not ripping me off,” she added via text overlay.

The indication was that because the original Dawn soap bottle wasn’t filled all the way to the brim, the company was somehow selling her short on the product.

In actuality, not filling products up to the very top is standard practice, and done for safety reasons. Commenters were more than ready to fill the TikToker in on this little tidbit.

“You’re not getting ripped off, you are paying for a volume,” @__georgiagrace__ explained. “There’s a space left in most things to avoid leaking or popping in transport.”

“They literally wrote the amount of the liquid in the container, you’re not getting ripped off,” added @opium.yellow.

Others just thought the action of stealing soap was wasteful, and could cause problems for someone else if they bought the bottle @chemical.xxx siphoned from without looking closely.

Another viewer simply asked, “Did you know that product tampering is a felony?”

In a comment to someone asking why she chose the off brand soap, @chemical.xxx provided a little more context for the video, claiming that the bottle she poured from was already half empty.

“Someone already did it before me and I thought ‘that’s hilarious I’m going to do that post this on [TikTok],” she wrote.