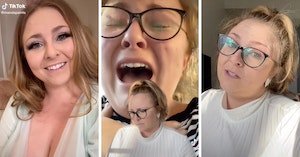 A TikTok user named Amanda Lee is opening up about being misdiagnosed because of her weight.

Weight bias is not a new thing in medicine, but it’s about time it is eradicated. Medical weight bias occurs when a medical professional makes assumptions about a patient’s health based on their weight. These assumptions are usually rooted in stereotypes and/or prejudice and not actual medicine.

It is not uncommon for medical weight bias to lead to patients being misdiagnosed, which is exactly what happened to Lee, according to a report from BuzzFeed.

In a viral TikTok video, Lee showed an old clip of herself leaving the doctor’s office. In the clip, Lee can be seen crying as she tried to explain her experience with the doctor. Lee said she described her symptoms, which included feeling pain while eating, and the doctor replied, “Maybe that’s not such a bad thing.”

As the old clip ended, Lee began to speak. She explained that she recorded the clip a year ago and it was approaching the anniversary of when she was diagnosed with cancer.

Lee explained that after being dismissed by the first doctor, she took her concerns to another medical professional, who later discovered she had colon cancer.

She went on to express her total disbelief that the first doctor had ignored such a “textbook colon cancer symptoms” because of her weight.

While chatting with BuzzFeed, Lee acknowledged that the issue of medical weight bias is a part of a much bigger societal problem.

“Society almost sees fat bodies as an inconvenience. I’m a normal-sized American. I teeter between a size 12–14. How did I, a barely above average-size woman almost die from fatphobia?” she said.

“It goes way further than BMI. It goes into society as a whole, and how we look at fat bodies, and how we deem them unworthy of things, including medical help. I’m fed up with it.”

Lee’s video garnered hundreds of comments, many of which offered love, support, and validation. She said the response made her incredibly happy. After using her own experience to start the conversation, Lee now creates content to help others to speak up for themselves when seeking medical care.