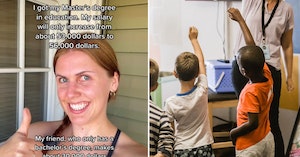 A teacher with a TikTok account is using her platform to demonstrate just how much of a joke teacher pay is in the U.S. by posting a video explaining that after getting her Master’s degree to become a better educator, her salary was only bumped up by $3,000. The average Master’s program in this country will run you about $30,000, or much more if you opt for prestigious private schools.

The total salary given to TikTok user and middle school teacher Ms. Zak totals $56,000. We assume that’s before taxes.

“I got my Master’s degree in education,” says Zak in the overlay text as she gives an exaggerated smile and thumbs-up. “My salary will only increase from about 53,000 dollars to 56,000 dollars.”

“My friend, who only has a bachelor’s degree, makes about 30,000 dollars more than me (while working less hours).”

Zak’s comment about her friend is not particularly surprising. In 2021, Newsweek published a list of 75 jobs with higher average salaries than Zak’s which only require a Bachelor’s degree in most situations. Sales representatives in the science and tech industry make an average of $86,650 per year without a specialized degree.

The average public school teacher for grades K-12 in the U.S. is $64,524, but this varies widely by state, according to the World Population Review. Zak would be making a bit less than average if she lived in Georgia ($57,095) and would be seriously underpaid in New York ($85,889).

Public school teachers in the U.S. have long been underpaid in spite of the fact that they’re doing some of the most important work known to humanity — educating and practically raising every generation of people who go on to lead and make the world. Much of this is due to certain political figures pushing the idea that teaching is easy and/or that teachers are actually evil agents of liberalism out to corrupt the minds of their children by telling them that slavery happened and was bad.

Some of these falsehoods have been reflected in the comments on Zak’s video.

“[Y]our choice. Live with the consequences,” one reads. “You could’ve chosen to do something else. ALSO you get a nice pension, insurance, summers off. Not a bad deal.”

Many teachers report taking second jobs during the summer in order to make ends meet, and/or attend various seminars and additional training to keep up on the latest teaching methods so they can educate our kids better. Additionally, about half of all teachers never get a pension because they’re burned out of the job before they can qualify.

Of course, the more important thing is that if everybody chooses to do something else, who is going to teach the millions of children who need education every year?

Other teachers in the comments are pointing out the many ways in which their job is far from “amazing,” and is in fact exhausting, demoralizing, and difficult in ways people can hardly imagine unless they’ve experienced it firsthand.

“Here come the people that aren’t educators to comment about how our jobs are ‘amazing,'” wrote one such teacher. “They just don’t know.”

“So frustrating and I have to work another job to supplement,” said another.