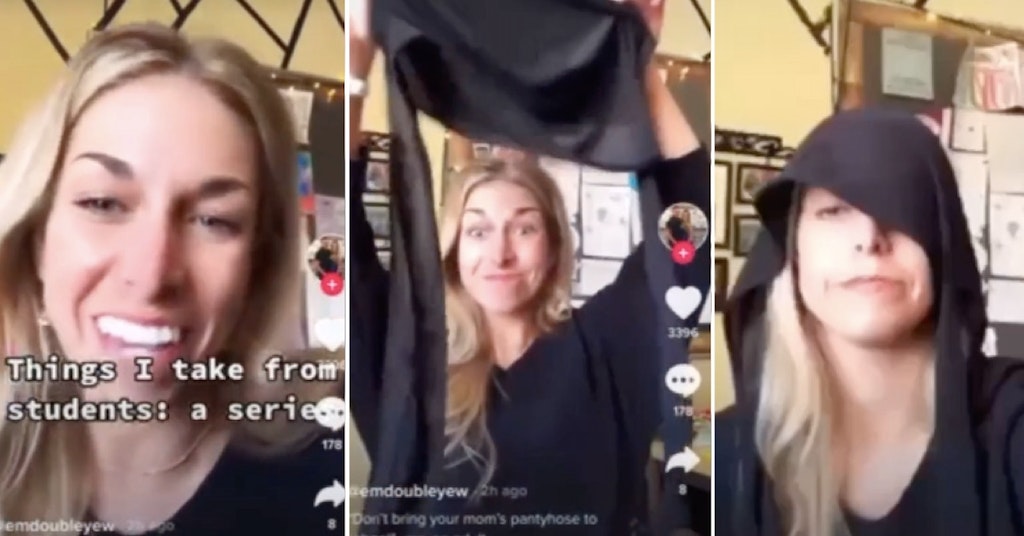 
A woman on TikTok identified by by creator @auntkaren0 as Mariah Webb is a Wyoming junior high school teacher who posted a video about a durag many are calling racist.

Webb posts about items she confiscates from her students, and dedicated one this week to taking the durag from the student. In the video, she spins around in her chair in an attempt to be playful, then displays the item, saying it looks like “pantyhose.” She then draped it over her head.

User @auntkaren0 recorded Webb’s video, and posted it to her own account where she called the teacher the “racist of the day.”

“Now Mariah, the devil works hard but we work harder,” said @auntkaren0, showing how she discovered the teacher’s identity through a wedding announcement, and displays the school she works at and an email address to contact them.

“I gotta say, I am wondering if the high school knows that you enjoy purposely confiscating your black students’ durags and then, of course, wearing them like ‘pantyhose,’ you say?”

The school must have gotten a lot of emails, because there is also an apology video from Webb, in which she says she was culturally insensitive and there was some misunderstanding of her actions.

“I owe every single person who saw my video yesterday an apology for my cultural insensitivity,” she said. “I would like to say that I am not justifying any actions that I did, however, I would please ask for some forgiveness, due to the context of the situation and my lack of education. The black item, that I found out was a do-rag from TikTok, was taken away from a white student who had it wrapped around his neck in my class. I did not find this to be very appropriate, so I took it from him and thought it was just another silly item that my students were bringing to class.”

She continued, “The reality of the situation is, I posted that on TikTok thinking that they were pantyhose, and put them on my head because sometimes I do silly things like that for my students. And it was very offensive and I apologize and I will never let it happen again.”

She has since deleted her TikTok entirely, according to the Daily Mail.