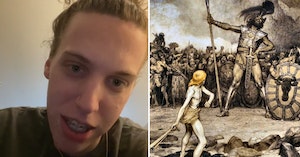 A TikTok video has gone viral after a man by the name of Benny Velour took the time to address some of the more popular Bible stories, putting them in plain terms to highlight how hilariously bizarre they can be when approached from an objective lens. Velour touches on the tales of David and King Saul, Abraham’s attempted sacrifice of his son Isaac, and the whole Jesus being God thing.

“Reading the Bible outside of religious texts is just objectively f—ing hilarious to me,” he says as the video begins.

Velour goes on to explain the story of David and Goliath, in which the relatively small David defeats the giant man in a one-on-one fight by hitting him in the head with a single stone using nothing but his slingshot. David, now being hailed as a hero and God’s chosen, takes his newfound fame and asks King Saul if he can marry his daughter.

Saul doesn’t outright deny him, but rather gives David a rather unusual task to complete first.

“This motherf—er had the weirdest request you could possibly request,” says Velour. “He said: ‘Look, you know the Philistines?’ David’s like: ‘Yeah, f— ’em.’ King Saul’s like: ‘Yeah, f— ’em, that’s what I’m saying, I need you to collect 100 of their foreskins and bring them back to me, and you can marry my daughter.'”

“What the f— kind of request was that?”

For those interested, Biblical experts have speculated that Saul meant to give David a task so difficult that he would likely die before he could complete it because he didn’t want David to marry his daughter. This makes sense as many people, especially those who do not follow Jewish tradition, do not tend to give up their foreskins without a fight.

Unfortunately for Saul, David was not only up for the task, but went for extra credit.

Velour then goes after the rather confusing concept of Jesus being God and simultaneously the son of God.

He ends with the story of Abraham and Isaac, which many comedians and other commentators have pointed out is a rather messed up tale of God telling a man to prove his devotion by murdering his own son, only to say psych at the last second.

“You know how f—ing mad I’d be if my dad did that s–t to me?” says Velour. “That motherf—er would not be invited to Christmas anymore.”

Velour’s take on the Bible has been so entertaining that multiple commenters have requested that he do a series of videos on the topic, saying that they learned more from him about the book than they ever did in church.

“I learned more rn than any Sunday school class I’ve ever been to,” said one TikTok user.

“I need you to summarize every bible story for me please this was healing for me,” wrote another.