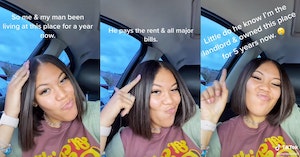 A TikToker’s claim that she’s her boyfriend’s landlord and he doesn’t even know it has viewers divided.

“So me & my man been living at this place for a year now. He pays the rent & all major bills,” she wrote. “Little do he know I’m the landlord & owned this place for 5 years now.”

Throwing up a peace sign, she added: “So his direct deposits are going straight to me.”

The caption accompanying the video asked viewers if they thought her boyfriend would be mad once he found out about the underlying situation, and people were fairly torn in their responses.

“Some of y’all just mad she thought of it and you didn’t. This ma’am is a Boss Move!” argued @wooisforever.

One viewer called it “an investment and security for [Jaynee] if the relationship ends,” while another theorized that “most people who agree with her are the same ones who would disagree if roles were reversed.”

A subsequent update from Jaynee suggests that her boyfriend heard about the video after it went viral, although she didn’t dish on whether or not he was chill with the whole thing, leaving viewers to continue arguing it out among themselves.