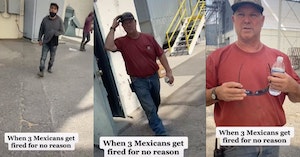 TikToker Confronts Boss Over Why He Was Fired In Viral Video

A TikToker using the name @juanevalackin2 shared a video where he is speaking to his bodd, Fred, asking why he and two other Mexican construction workers were first from the site that day. The video was posted on January 3rd and attracted hundreds and hundreds of thousands of views.

“When 3 Mexicans get fired for no reason,” he wrote in the overlay text of the video. In the TikTok, he films the boss man and asks why they all got fired today.

“I’m not firing you, I just don’t need you anymore because you’re not doing anything,” his boss replies. “Thank you for your help.”

It’s not really clear what they’re talking about, but Fred also mentions that the TikToker refused to “go up” and gestures at a tall structure on the property. At that, the worker insists he already “finished everything.”

In a follow-up video, the TikToker show a vision of a man climbing down from a ladder as proof that he did “go up” and “finish everything” whatever that means.

The TikToker clearly thinks his white boss had it out for his Mexican workers, which is certainly possible, and construction jobs tend to be unsafe, and inconsistent for employees. However, it’s not really clear what is going on and based on what is actually said in the videos, it seems like he finished the work and so there was no more work.