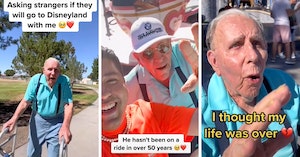 For many, a long life is the mark of a life well-lived and fully experienced, but with that longevity comes a sense of settling into one’s day-to-day life. It’s hard to look forward to new experiences when all you can think about is the end, but that doesn’t have to be the case.

TikToker and fashion designer Isaiah Garza, aka @isaiahgarza, decided to shake things up a bit for one elderly gentleman, a 100-year-old veteran he found walking by himself in the park. Garza walked up to him and invited him to Disneyland, to the elderly man’s delight.

“I’m sorry to bother you, but I’ve had a really rough day,” Garza said. “I just wanted to see if you’d be willing to go to Disneyland with me today?”

“Hey, that’s great!” the veteran, who remained unnamed in the video, replied. “You really want to take me? Oh my gosh!”

His reaction to the request is so heartwarming, and the TikToker was true to his word, taking the adorable old man with him for a whirlwind day at the parks. They very quickly became close friends as the day progressed.

They swapped out the older man’s walker for a wheelchair in the park, and did everything you could imagine in a perfect day at the House of Mouse, from meeting the character actors to eating snacks to going on rides together, something the man admitted to Garza he hadn’t done in 50 years! The TikToker even got him a pair of iconic Micky Mouse ears with a big red bow to wear around the park.

The video has received over 16.4M views, 3.3M likes, and 96.2K comments, and has pulled on many viewers’ heartstrings. At the end of the video, Garza asked him what it was like to be at Disneyland that day, to which the 100-year-old man replied, “This is one of the best days of my life. I feel like I might be dreaming or something. I thought my life was over. I will remember this day for a long time.”

He started tearing up as he said, “You don’t know how much I appreciate this. You really… you don’t know.”

In the comments section, Garza posed the question to his viewers, “Guys!!! should I start a new series with him?!?! ❤️😁👀” which has received an overwhelmingly positive response. After so many people begged him to hang out more with the 100-year-old man, Garza replied, “i promise i will.”

With any luck, there will be many more beautiful adventures for the pair of them to go on in the future, whether it is documented for social media or not. Check out the full video below!