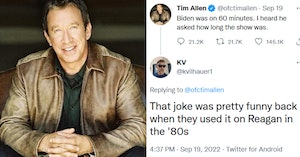 Tim Allen is truly a fine case of “how the mighty have fallen,” once a beloved household name from his starring role on Home Improvement and as Buzz Lightyear in Toy Story, now a Trump fan tweeting out the most tired and crusty old one-liners you could think of.

This time, going after President Joe Biden again in order to get easy praise from his MAGA following, Allen farted out the same joke about 60 Minutes that’s been used for a long list of public figures (as well as anyone blonde).

Biden appeared on 60 Minutes on Sunday to speak on issues like inflation, the COVID-19 pandemic, and the war in Ukraine.

Look, we’ll admit to being bigger fans of Joe Biden than Donald Trump and any of his sycophants — it’s pretty obvious, and we never claimed to be neutral here. But this joke is so objectively snooze-worthy that Allen really should have to turn in his comedian card at this point.

The only upside is that every time Allen breaks out his reading glasses to slowly type out these one-liners that would be met with awkward silence at any open mic night, the rest of Twitter shows up to make better jokes about how irrelevant Tim Allen is. You’d think he might hesitate to tweet considering the fact that people bring up his troubled past each time, and this is no exception.

Yes, Tim Allen spent over two years in federal prison after pleading guilty to drug trafficking charges and snitching on a bunch of other drug dealers. He was first arrested in 1978 and paroled in 1981, gaining early release for good behavior. He also got a DUI in 1998, one year before Home Improvement ended.

If you’re here looking for comedy, you have only to seek out the comments and quote retweets.