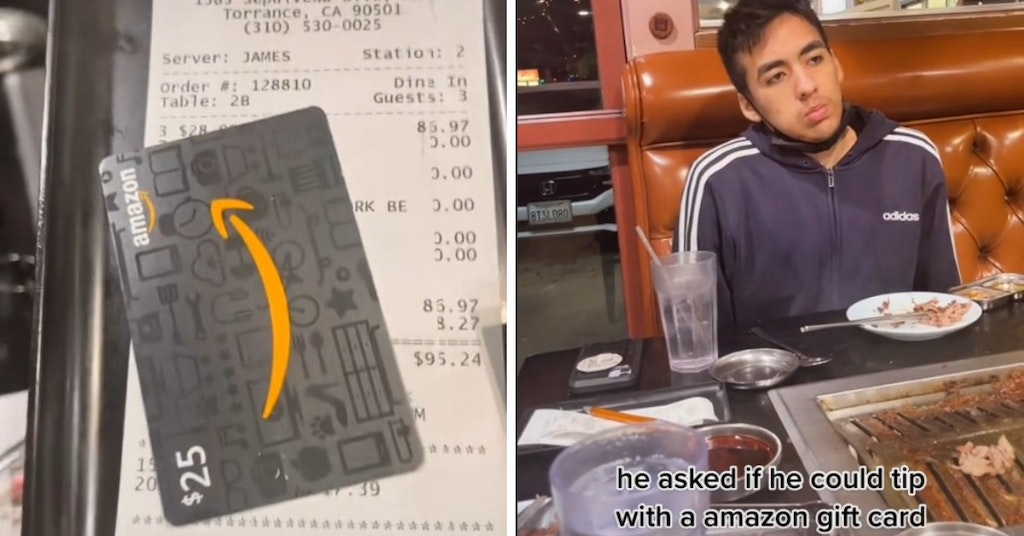 A TikTok video showing a young man in a restaurant offering a $25 Amazon gift card as a tip instead of cash has sparked fierce debate in the comments over whether this is an appropriate way to tip your server. The tone of the video itself suggests that the TikTok user and server did not appreciate this method of tipping, though did say in the video description that the “holidays left us #broke.” It’s unclear, however, if user Kaitlyn was talking about herself or the customer being broke.

The customer could not have been entirely broke considering the fact that he went out to a sit-down restaurant and racked up a bill of $95.24 for three platters of food that we really hope he shared with some other people. Regardless, many who support food service workers say that if you can’t afford to tip properly, then you can’t afford to eat out at all.

Many who currently work food service have also pointed out that you can’t pay rent or bills with an Amazon gift card. Due to decades of stagnated wages, particularly for tipped staff who in some states can be paid less than federal minimum wage, with rising costs of living and of course, the pandemic, many can’t afford to spend money on anything but the essentials, which are hard to get on Amazon.

“As a waitress no, I need bills paid not Amazon,” remarked one TikTok user.

Others, however, have made the argument that a $25 gift card on a $95 bill is over a 20 percent tip — often considered in the U.S. to be the high end of the tipping spectrum — and so the server should be grateful. They’ve also pointed out that such a tip couldn’t be subjected to taxes, although you might want to check with the IRS before you take that as gospel.

Some service workers have also said that they would be and have been fine with gift card tips.

“Once a lady had no cash and tipped me with a $10 Starbucks card. I loved it!” said a commenter.

Of course, everyone’s situation is different. Some have made the claim that “Amazon has everything,” but things like food and other essentials are often marked up compared to local grocery stores and if you have to pay for shipping, suddenly that doesn’t feeling like over a 20 percent tip anymore. And if you’ve got urgent bills to pay, a gift card tip might as well be no tip at all. Plus, until you check, there’s no guarantee that gift card hasn’t been used already.

The TikTok video has so far racked up over 343,000 views after being posted on Monday.

Tipping debates have come and gone in the U.S. for many years, possibly since the concept was invented, with many people feeling like it’s their right to choose to tip how and how much they want, often depending on the quality of service. The unfortunate reality is that many companies now use the tipping custom as an excuse to pay their workers very poorly, forcing customers to either help supplement the workers’ meager income or make them feel horrible and even more stressed by refusing.

The situation is generally not helped by people telling tipped employees they should feel “grateful” for every tip they get, which only reminds these workers that any day could be a low tip day that could leave them short on rent at the end of the month. This constant state of uncertainty for workers who often live paycheck to paycheck adds another layer of crushing stress to already difficult and high-stress work.

Demanding a higher minimum wage and an end to sub-minimum wages for tipped workers might be a better solution for those who want to “abolish tipping.”