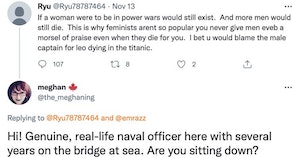 Who do you blame for Jack’s death in the film Titanic? Is it the fault of Rose, who didn’t make space for him on the door? Or is it the fault of capitalism? Or patriarchy? This is kind of the Rorschach test of David Cameron films, though Avatar brings up a lot, too.

Anyway, feminist Twitter personality @emrazz started a conversation that someone ended up asking all of these questions and an actual Naval ship captain had to step in.

The original message really had nothing to do with Titanic, @emrazz was just making a point about how it isn’t just men who die in wars. A random account whose name is mostly numbers responded with this non-sequitur full of spelling errors:

“If a woman were to be in power wars would still exist. And more men would still die. This is why feminists arent so popular you never give men eveb a morsel of praise even when they die for you. I bet u would blame the male captain for leo dying in the titanic.”

That’s when Twitter user @the_meghaning jumped in to say, “Hi! Genuine, real-life naval officer here with several years on the bridge at sea. Are you sitting down? Good. It is totally the ship captain’s fault for fictional Leo dying. In fact, it is also the real Titanic captain’s fault for all the non-fictional people dying IRL.”

It was pretty funny and also true, which made it even better:

And @emrazz learned a lot about the world of blaming Rose for Jack’s death, and Kate Winslet especially:

The more you know (when you talk to actual experts).