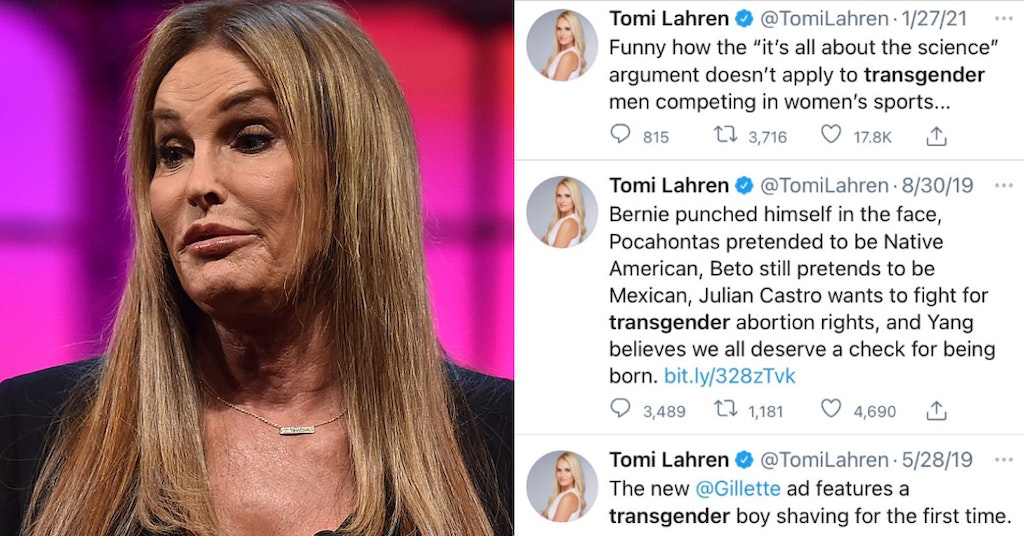 Fox News pundit Tomi Lahren has ended up as the subject of everyone’s ire after calling out her fellow Republicans for jeering California gubernatorial candidate Caitlyn Jenner at CPAC this weekend, some using transphobic language. While this might normally gain approval from the political left, Lahren has a long history of her own transphobia when it comes to individuals and topics in which it’s politically advantageous for her to switch on the anti-trans bigotry.

“The attacks on @Caitlyn_Jenner are despicable,” she wrote late Sunday night. “I’ll go to bat for her every single time and if you want to take my ‘conservative’ card for it, take it and shove it. Your mob is no better than the Left’s and in fact, it’s uglier.”

Lahren’s comments follow the publishing of a video from CPAC showing Jenner walking toward the exit as the person filming follows and repeatedly deadnames her (using the name given to her at birth that she changed after coming out) and asks her about “the stuff they’re teaching in schools regarding the LGBTQ.” As Jenner exits, the filmer asks “what about Jesus Christ” and out of earshot, misgenders her, wonders why any conservatives would want a photo with her, and calls her an anti-trans slur and a “sick freak.”

These actions and statements by the transphobic CPAC attendee are, of course, despicable and deserve to be condemned. However, plenty on the left who have been criticizing the Republican party the whole time for happily harboring and promoting transphobes are not buying this seeming change of heart on the part of Lahren considering the fact that she has lobbed plenty of her own hate at trans people since she grabbed her part of the spotlight.

In 2019, for example, Lahren was one of the conservative voices getting outraged over a commercial for shaving products because one of their commercials featured a transgender boy. She claimed it was working to “normalize” high school kids “undergoing hormone therapy and gender reassignment,” neither of which were featured in the commercial at all.

In 2017, she demanded an “actual argument” from the “libs” as to “why transgenders should serve” in the military after the previous ban was lifted, never thinking to ask why cisgenders should serve. She wrote a whole argument on it accusing the U.S. military of conducting a “social experiment” by letting trans people be themselves within their ranks.

Republicans like Lahren once again find themselves on the losing side of a culture war they started and are now having to decide whether they will support Republican trans people who have money and even power and expose themselves as hypocrites or double down on their pointless bigotry. The process never stops being funny.