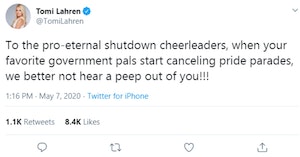 Fox News talking head Tomi Lahren has once again tried and failed to write a clever tweet about a topical issue. Most recently, she was widely mocked by LGBTQ+ communities for attempting to taunt us with the potential cancellation of Pride events in June.

To the pro-eternal shutdown cheerleaders, when your favorite government pals start canceling pride parades, we better not hear a peep out of you!!!

What Tomi didn’t know, because she’s not in with the cool kids, is that Pride events across the U.S. have already been canceled, and the overwhelming response from LGBTQ+ people has been relief and gratitude. That’s because we don’t want coronavirus outbreaks in our communities, and queer people do have the capacity to be as irresponsible as Tomi Lahren, rare as it may be.

Only time will tell if 2020 will see some of the “Straight Pride” parades that amused the nation and that Tomi encouraged last year. Don’t worry, though, since most of those events were so sparsely populated that they wouldn’t have broken local prohibitions against gatherings of over 10 people.

This kind of ignorance is limited to Tomi, however, as many of her supporters came out to broadcast their own by making comments that just get funnier and funnier the more you read them, knowing that so many Pride events have already been canceled.

Sad thing is… they won’t cancel those.

Oh c’mon. When have they shut down an event of their own supporters?

They won’t be shut down. Their cronies in government will say it’s vital to the community.

It’s a mystery how so many people left comments like this without seeing the many more comments explaining that the cancelations already happened and nobody is mad about it.

Funny how you didn’t “hear a peep” about them being cancelled weeks ago, you fucking ghoul.

They’re already canceling them, and we’re dealing with it like adults. But not one to let reality step all over whatever it is rattling around in your head, are you?

How do you justify this level of being wrong and continue putting yourself in the public eye.

They cancelled Pride a while back.

Nobody was mad about it because people’s safety matters more.

Seriously, aren’t you embarrassed by being this negligent?

Does she ever get tired of being wrong?