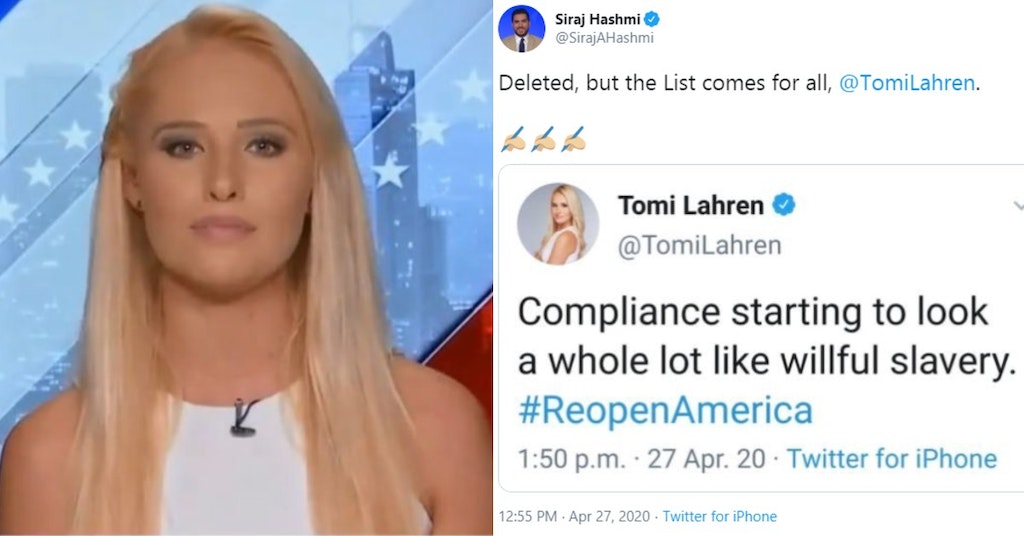 Not to be outdone by politicians and pundits saying absurd, false, and dangerous things about local areas being put under stay-at-home orders, Fox News pundit Tomi Lahren compared compliance with these orders “willful slavery.” Not only did she manage to compare something that is not even close to slavery to slavery, she demonstrated a complete misunderstanding of the concept using just two words.

It would be impressive if it wasn’t so offensive.

Lahren’s not one to delete even her worst tweets, but this one was bad enough that it soon vanished from her Twitter page. Of course, that was not before many individuals grabbed a screenshot.

Everyone’s favorite name to misspell has been a vocal supporter of protesters who have been going out in protective equipment to declare that the virus isn’t dangerous and we should all be allowed to go back to work so people like Lahren can get their roots dyed. She has become one of the privileged voices declaring that protecting an economy that only worked for rich people like her is more important than actual human lives.

The supply chains are weakening, Americans are losing everything & elected officials are giving vague answers as to when it will end. The point was to flatten the curve but here we are waiting and holding our breath hoping the gov will allow us to earn a living for our families.

She is also very concerned that Democrats were able to push their well-known agenda of having the government send people not enough money for a single month’s rent one time thanks to the pandemic.

With help from the pandemic and the national alarm that came with it, the Democrats were able to force us into a trial run of their progressive agenda with very little, if any pushback. Why? Because too many Americans are content with being SHEEP!

People have largely grown weary of Lahren’s antics over the years as she strives to gain attention by outdoing other right-wing talking heads in the “who can say the worst thing” contest, but this one is just too hard to ignore.

No, willful slavery would be ignorantly going back to jobs that won’t protect you from getting sick because a bunch of rich white people arent reaping the profits they normally would be making off the backs of others.

"Willful slavery." Putting the moron back in oxymoron. https://t.co/aM07JNpiwW

Sorry for making you look at that.